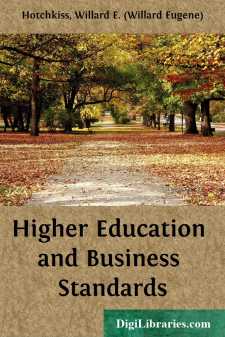 Lastsummer, when we reached California for a year's sojourn, we had the good fortune to secure a house with a splendid garden. A few weeks ago, after the early warm days of a California February had opened up the first blossoms of the season, our little five-year-old discovered that the garden furnished a fine outlet for her enterprise, and she soon produced two gorgeous—I will not say beautiful—bouquets. Barring a certain doubt about her mother's approval, she was well satisfied with her achievement, she felt a sense of completeness in what she had done—and well she might, for she had not left a visible bud.

There is a strong tendency to go at business the way Helen went at the garden. She knew what to do with bouquets; raw material for making them was within her reach; what more natural than to turn it, in the most obvious and simple way, into the product for which it was designed. From her standpoint such a procedure was entirely correct—she was making bouquets for herself and her friends; every one in her circle would share the benefit of her industry.

Whenever in the past business enterprise has proceeded from a similar viewpoint, we have stood aside and let it proceed; it was not our garden; we were quite willing to take the rôle of disinterested spectators. Recently we have discovered that it is our garden; we have learned that we are not disinterested; we now see that business plays a large part in the life of every one of us. That being the case, we assume the right to question its processes, its underlying policies, and its results. We are gradually coming to think of business in terms of an integrated and unified national life. We desire the national life to be both wholesome and secure.

What the public really wants from business, then, is a contribution to national welfare, and it has become convinced that, by taking thought, it can make the contribution more certain and more uniform than it has been in the past. Many business men share this view; with varying zeal they are trying to work out standards of organization that will insure the kind of regard for general welfare which the public has come to demand.

This is the new idea in business; it has already taken deep root; but it needs to be further developed. We have the difficult task of reducing an idea to a practical working plan. How shall we go about it? Fortunately the idea itself contains a hint for further procedure. A new attitude in business must be coupled with a new attitude in public policy.

When my enterprising child made an onslaught on the garden it would have been easy enough to punish her; but it is doubtful if mere punishment gets very far in a case of that sort. Unless we can teach the child to enjoy the garden without destroying it, the restraining influence of punishment will be no stronger than the memory of its pain or the fear of its repetition. This memory of the past and fear of the future usually wage a most unequal contest with the vivid and alluring temptation of the present.

But should not the child be restrained? As far as necessary to protect the garden, and perhaps also to make her conscious of an authority in the world outside of her own will, yes—but that is not the main task. The main task is to educate her, to develop an understanding of the garden, to get her in the frame of mind in which she will derive her greatest enjoyment when she cultivates it and sees it grow, and when she restricts her picking to a reasonable share of what the garden produces.

In the actual case before us, the child was after quick and easy results, the only kind she could comprehend; she was unable to look upon the garden as a living thing whose life and health must be preserved to-day in order that it may yield returns to-morrow and next week....