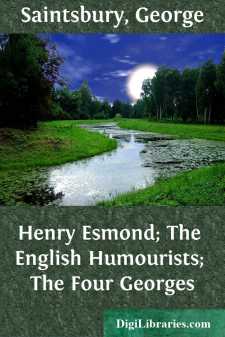 Thackeray In His Study At Onslow Square. From a painting by E. M. Ward

We know exceedingly little of the genesis and progress of Esmond. “It did not seem to be a part of our lives as Pendennis was,” says Lady Ritchie, though she wrote part of it to dictation. She “only heard Esmond spoken of very rarely”. Perhaps its state was not the less gracious. The Milton girls found Paradise Lost a very considerable part of their lives—and were not the happier.

But its parallels are respectable. The greatest things have a way of coming “all so still” into the world. We wrangle—that is, those of us who are not content simply not to know—about the composition of Homer, the purpose of the Divina Commedia, the probable plan of the Canterbury Tales, the Ur-Hamlet. Nobody put preliminary advertisements in the papers, you see, about these things: there was a discreditable neglect of the first requirements of the public. So it is with Esmond. There is, I thought, a reference to it in the Brookfield letters; but in several searches I cannot find it. To his mother he speaks of the book as “grand and melancholy”, and to Lady Stanley as of “cut-throat melancholy”. It is said to have been sold for a thousand pounds—the same sum that Master Shallow lent Falstaff on probably inferior security. Those who knew thought well of it—which is not wholly surprising.

It is still, perhaps, in possession of a success rather of esteem than of affection. A company of young men and maidens to whom it was not long ago submitted pronounced it (with one or two exceptions) inferior as a work of humour. The hitting of little Harry in the eye with a potato was, they admitted, humorous, but hardly anything else. As representing another generation and another point of view, the faithful Dr. John Brown did not wholly like it—Esmond’s marriage with Rachel, after his love for Beatrix, being apparently “the fly in the ointment” to him. Even the author could only plead “there’s a deal of pains in it that goes for nothing”, as he says in one of his rare published references to the subject: but he was wrong. Undoubtedly the mere taking of pains will not do; but that is when they are taken in not the right manner, by not the right person, on not the right subject. Here everything was right, and accordingly it “went for” everything. A greater novel than Esmond I do not know; and I do not know many greater books. It may be “melancholy”, and none the worse for that: it is “grand”.

For though there may not be much humour of the potato-throwing sort in Esmond, it will, perhaps, be found that in no book of Thackeray’s, or of any one else’s, is that deeper and higher humour which takes all life for its province—which is the humour of humanity—more absolutely pervading. And it may be found likewise, at least by some, that in no book is there to be found such a constant intertwist of the passion which, in all humanity’s higher representatives, goes with humour hand in hand—a loving yet a mutually critical pair....