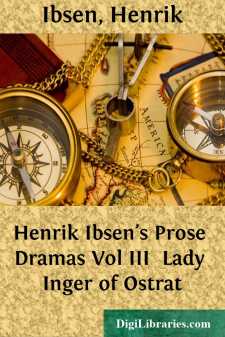 (A room at Ostrat. Through an open door in the back, the Banquet Hall is seen in faint moonlight, which shines fitfully through a deep bow-window in the opposite wall. To the right, an entrance- door; further forward, a curtained window. On the left, a door leading to the inner rooms; further forward a large, open fireplace, which casts a glow over the room. It is a stormy evening.)

(BIORN and FINN are sitting by the fireplace. The latter is occupied in polishing a helmet. Several pieces of armour lie near them, along with a sword and shield.)

FINN (after a pause). Who was Knut* Alfson?

BIORN. My Lady says he was the last of Norway's knighthood.

FINN. And the Danes killed him at Oslo-fiord?

BIORN. Ask any child of five, if you know not that.

FINN. So Knut Alfson was the last of our knighthood? And now he's dead and gone! (Holds up the helmet.) Well then, hang thou scoured and bright in the Banquet Hall; for what art thou now but an empty nut-shell? The kernel—the worms have eaten that many a winter agone. What say you, Biorn—may not one call Norway's land an empty nut- shell, even like the helmet here; bright without, worm-eaten within?

BIORN. Hold your peace, and mind your work!—Is the helmet ready?

BIORN. Then put it by.—— —— See here; scrape the rust offthe sword.

FINN (turning the sword over and examining it). Is it worthwhile?

BIORN. What mean you?

FINN. The edge is gone.

FINN (as before). There's no grip to it!

(FINN hums to himself for a while.)

FINN. An empty helmet, an edgeless sword, a shield without a grip—there's the whole glory for you. I see not that any can blame Lady Inger for leaving such weapons to hang scoured and polished on the walls, instead of rusting them in Danish blood.

BIORN. Folly! Is there not peace in the land?

FINN. Peace? Ay, when the peasant has shot away his last arrow, and the wolf has reft the last lamb from the fold, then is there peace between them. But 'tis a strange friendship. Well well; let that pass. It is fitting, as I said, that the harness hang bright in the hall; for you know the old saw: "Call none a man but the knightly man." Now there is no knight left in our land; and where no man is, there must women order things; therefore——

BIORN. Therefore—therefore I order you to hold your foul prate!(Rises.)    It grows late. Go hang helm and harness in the hall again.

FINN (in a low voice). Nay, best let it be till tomorrow.

BIORN. What, do you fear the dark?

FINN. Not by day. And if so be I fear it at even, I am not the only one. Ah, you look; I tell you in the housefolk's room there is talk of many things. (Lower.) They say that night by night a tall figure, clad in black, walks the Banquet Hall.