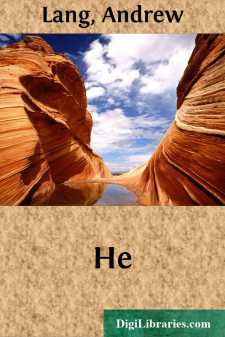 As I sat, one evening, idly musing on memories of roers and Boers, and contemplating the horns of a weendigo I had shot in Labrador and the head of a Moo Cow1 from Canada, I was roused by a ring at the door bell.

A literary friend to whom I have shown your MS. says a weendigo is Ojibbeway for a cannibal. And why do you shoot poor Moo Cows?—Publisher.

Mere slip of the pen. Meant a Cow Moose. Literary gent no sportsman.—Ed.

The hall-porter presently entered, bearing a huge parcel, which had just arrived by post. I opened it with all the excitement that an unexpected parcel can cause, and murmured, like Thackeray's sailor-man, 'Claret, perhaps, Mumm, I hope——'

It was a Mummy Case, by Jingo!

This was no common, or museum mummy case. The lid, with the gilded mask, was absent, and the under half or lower segment, painted all over with hieroglyphics of an unusual type, and green in colour—had obviously been used as a cradle for unconscious infancy. A baby had slept in the last sleeping-place of the dead! What an opportunity for the moralist! But I am not a collector of cradles.

Who had sent it, and why?

The question was settled by an envelope in a feminine hand, which, with a cylindrical packet, fell out of the Mummy Case, and contained a letter running as follows:—

'My dear Sir,—You have not forgotten me and my friend Leonora O'Dolite?

'The Mummy Case which encloses this document is the Cradle of her ancient Race.

'We are, for reasons you will discover in the accompanying manuscript, about to start for Treasure Island, where, if anywhere in this earth, ready money is to be found on easy terms of personal insecurity.'

'Oh, confound it,' I cried, 'here's another fiend of a woman sending me another manuscript! They are always at it! Wants to get it into a high-class magazine, as usual.' And my guess was correct.

The letter went on:—

'You, who are so well known, will have no difficulty in getting the editor of the Nineteenth Century, or the Quarterly Review, or Bow Bells, to accept my little contribution. I shall be glad to hear what remuneration I am to expect, and cheques may be forwarded to

'P.S.—The mummy case is very valuable. Please deposit it at the Old Bank, in the High, where it will represent my balance.

Now I get letters like this (not usually escorted by a mummy case) about thrice a day, and a pretty sum it costs me in stamps to send back the rubbish to the amateur authors. But how could I send back a manuscript to a lady already on her way to Treasure Island?

Here, perhaps, I should explain how Mary Martin, as she signed herself, came to choose me for her literary agent. To be sure, total strangers are always sending me their manuscripts, but Mrs. Martin had actually been introduced to me years before.

I was staying, as it happened, at one of our university towns, which I shall call Oxford, for short—not that that was really its name....