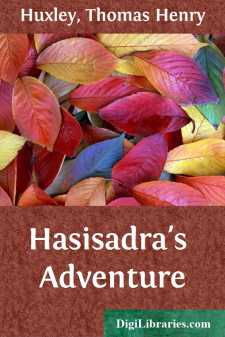 Some thousands of years ago there was a city in Mesopotamia called Surippak. One night a strange dream came to a dweller therein, whose name, if rightly reported, was Hasisadra. The dream foretold the speedy coming of a great flood; and it warned Hasisadra to lose no time in building a ship, in which, when notice was given, he, his family and friends, with their domestic animals and a collection of wild creatures and seed of plants of the land, might take refuge and be rescued from destruction. Hasisadra awoke, and at once acted upon the warning. A strong decked ship was built, and her sides were paid, inside and out, with the mineral pitch, or bitumen, with which the country abounded; the vessel's seaworthiness was tested, the cargo was stowed away, and a trusty pilot or steersman appointed.

The promised signal arrived. Wife and friends embarked; Hasisadra, following, prudently "shut the door," or, as we should say, put on the hatches; and Nes-Hea, the pilot, was left alone on deck to do his best for the ship. Thereupon a hurricane began to rage; rain fell in torrents; the subterranean waters burst forth; a deluge swept over the land, and the wind lashed it into waves sky high; heaven and earth became mingled in chaotic gloom. For six days and seven nights the gale raged, but the good ship held out until, on the seventh day, the storm lulled. Hasisadra ventured on deck; and, seeing nothing but a waste of waters strewed with floating corpses and wreck, wept over the destruction of his land and people. Far away, the mountains of Nizir were visible; the ship was steered for them and ran aground upon the higher land. Yet another seven days passed by. On the seventh, Hasisadra sent forth a dove, which found no resting place and returned; then he liberated a swallow, which also came back; finally, a raven was let loose, and that sagacious bird, when it found that the water had abated, came near the ship, but refused to return to it. Upon this, Hasisadra liberated the rest of the wild animals, which immediately dispersed in all directions, while he, with his family and friends, ascending a mountain hard by, offered sacrifice upon its summit to the gods.

The story thus given in summary abstract, told in an ancient Semitic dialect, is inscribed in cuneiform characters upon a tablet of burnt clay. Many thousands of such tablets, collected by Assurbanipal, King of Assyria in the middle of the seventh century B.C., were stored in the library of his palace at Nineveh; and, though in a sadly broken and mutilated condition, they have yielded a marvellous amount of information to the patient and sagacious labour which modern scholars have bestowed upon them. Among the multitude of documents of various kinds, this narrative of Hasisadra's adventure has been found in a tolerably complete state. But Assyriologists agree that it is only a copy of a much more ancient work; and there are weighty reasons for believing that the story of Hasisadra's flood was well known in Mesopotamia before the year 2000 B.C.

No doubt, then, we are in presence of a narrative which has all the authority which antiquity can confer; and it is proper to deal respectfully with it, even though it is quite as proper, and indeed necessary, to act no less respectfully towards ourselves; and, before professing to put implicit faith in it, to inquire what claim it has to be regarded as a serious account of an historical event.

It is of no use to appeal to contemporary history, although the annals of Babylonia, no less than those of Egypt, go much further back than 2000 B.C. All that can be said is, that the former are hardly consistent with the supposition that any catastrophe, competent to destroy all the population, has befallen the land since civilisation began, and that the latter are notoriously silent about deluges....