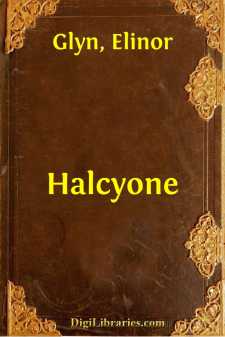 Outside one of the park gates there was a little house. In the prosperous days of the La Sarthe it had been the land steward's—but when there was no longer any land to steward it had gone with the rest, and for several years had been uninhabited.

One day in early spring Halcyone saw smoke coming out of the chimney. This was too interesting a fact not to be investigated; she resented it, too—because a hole in the park paling had often let her into the garden and there was a particularly fine apple tree there whose fruit she had yearly enjoyed.

She crept nearer, a tall, slender shape, with mouse-colored hair waving down her back, and a scarlet cap pulled jauntily over her brow—the delightful feeling of adventure tingling in her veins. Yes, the gap was there, it had not been mended yet—she would penetrate and see for herself who this intruder could be.

She climbed through and stole along the orchard and up to the house. Signs of mending were around the windows, in the shape of a new board here and there in the shutters; but nothing further. She peeped over the low sill, and there her eyes met those of an old man seated in a shabby armchair, amid piles and piles of books. He had evidently been reading while he smoked a long, clay pipe.

He was a fine old man with a splendid presence, his gray hair was longer than is usual and a silvery beard flowed over his chest.

Halcyone at once likened him to Cheiron in the picture of him in her volume of Kingsley's "Heroes."

They stared at one another and the old man rose and came to the window.

Halcyone did not move.

"I want to know who you are, and why you have come here?" she answered fearlessly. "I am Halcyone, you know."

"That ought to tell me everything," he said, gravely, "but unfortunately it does not! Who is Halcyone?"

"I live at La Sarthe Chase with the Aunts La Sarthe," she said proudly, as though La Sarthe Chase had been Windsor Castle—"and I have been accustomed to play in this garden. I don't like your being here much."

"I am sorry for that, because it suits me and I have bought it. But how would it be if I said you might come into the garden still and play? Would you forgive me then for being here?"

"I might," said Halcyone. "What are all these books for?"

"I knew that—" and she frowned, beetling her delicate dark brows, "but why such a lot? You can never read them all."

"I have read most of them already," he said. "I have had plenty of time, you see."

"Yes, I dare say you are old," said Halcyone— "and what are they about? I would like to know that. My books so seldom interest me."

He handed her one through the window, but it was written in Greek and she could not read it. She frowned again as she turned over the pages.

"Perhaps there is something nice in that," she said.

"That would take a long time—suppose you come in and have tea with me, then we could talk comfortably."