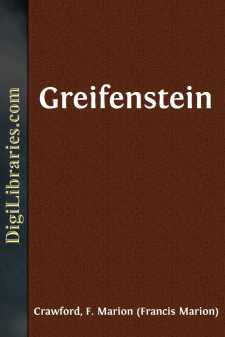 Frau von Sigmundskron was not really much past middle age, though the people in the village generally called her the old baroness. Her hair was very white and she was thin and pale; her bold features, almost emaciated, displayed the framework of departed beauty, and if her high white forehead and waxen face were free from lines and wrinkles, it must have been because time and grief could find no plastic material there in which to trace their story. She was a very tall woman, too, and carried her head erect and high, walking with a firmness and elasticity of step such as would not have been expected in one whose outward appearance conveyed so little impression of strength. It is true that she had never been ill in her life and that her leanness was due to the most natural of all causes; but these facts were not patent to the observer, and for reasons which will presently appear she herself would have been the last to mention them. There was something, too, in the look of her blue eyes, shaded by long brown lashes which had retained their colour, that forbade any expression of sympathy. The least experienced of mankind would have seen at a glance that she was the proudest of women, and would have guessed that she must be one of the most reticent. She moved and spoke as though Sigmundskron were still what it had been in former days, and she had brought up her only child to be as much like herself, as it was possible that anything so young and fair could resemble what was already a type of age and gravity.

Poverty is too insignificant a word to describe the state in which the mother and daughter lived, and had lived for many years. They had no means of subsistence whatever beyond the pension accorded to the widow of Lieutenant von Sigmundskron, 'fallen on the field of honour,' as the official report had expressed it, in the murderous war with France. He had been the last of his name and at the time of his death had no relations living; two years earlier he had married a girl as penniless and as noble as himself, and had lived to see a daughter born, destined to inherit his nobility, his penury, and the bare walls of his ancestral home.

Sigmundskron had been a very grand castle in its day, and the half- ruined walls of the old stronghold still rose majestically from the summit of the crag. Indeed the ruin was more apparent than real as yet, and a few thousands judiciously expended upon the masonry would have sufficed to restore the buildings to their original completeness. Many a newly enriched merchant or banker would have paid a handsome price for the place, though the land was gone and the government owned the forest up to the very foot of the rock. But the Lady of Sigmundskron would rather have starved to death in her vaulted chamber than have taken half the gold in Swabia to sign away her dead husband's home. Moreover, there was Greif, and Greif was to marry Hilda, after which all would be well again. Greif, with his money, would build and restore and furnish the old castle, and bring back the breath of life into the ancient halls and corridors....