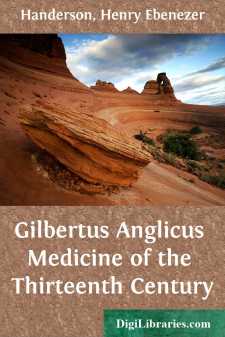 Owing to Dr. Handerson's modesty, even we who were for years associated with him in medical college, in organization, and professional work, knew but little of him. He would much rather discuss some fact or theory of medical science or some ancient worthy of the profession than his own life. Seeing this tall venerable gentleman, sedate in manner and philosophical in mind, presiding over the Cuyahoga County Medical Society or the Cleveland Medical Library Association, few of the members ever pictured him as a fiery, youthful Confederate officer, leading a charge at a run up-hill over fallen logs and brush, sounding the "Rebel yell," leaping a hedge and alighting in a ten-foot ditch among Federal troopers who surrendered to him and his comrades. Yet this is history. We could perhaps more easily have recognized him even though in a military prison-pen, on finding him dispelling the tedium by teaching his fellow prisoners Latin and Greek, or perusing a precious volume of Herodotus.

Henry Ebenezer Handerson was born on March 21, 1837, here in Cuyahoga county, in the township of Orange, near the point now known as "Handerson's Cross-Roads," on the Chagrin river. His mother's maiden name was Catharine Potts. His father was Thomas Handerson, son of Ira Handerson. The family immigrated to Ohio from Columbia county, New York, in 1834. Thos. Handerson died as the result of an accident in 1839, leaving the widow with five children, the eldest thirteen years of age, to support. Henry and a sister were adopted by an uncle, Lewis Handerson, a druggist, of Cleveland. In spite of a sickly childhood the boy went to school a part of the time and at the age of fourteen was sent to a boarding school, Sanger Hall, at New-Hartford, Oneida county, New York. Henry's poor health compelled him to withdraw from school. No one at that time would have predicted that the delicate youth would live to be the sage of four score years and one. With his foster father and family he moved to Beersheba Springs, Grundy county, Tennessee.

In 1854, in good health, the boy returned to Cleveland, prepared for college, and entered Hobart College, Geneva, New York, where he graduated as A.B. in 1858. Returning to Tennessee, he occupied himself for about a year with surveying land and in other work and then became private tutor in the family of Mr. Washington Compton on a cotton plantation near Alexandria, Louisiana. There he remained a year or more, then in the autumn of 1860 matriculated in the Medical Department of the University of Louisiana (now Tulane University), where he studied through the winter, and also heard much of the political oratory of that exciting period.

The bombardment of Fort Sumter, April 12, 1861, followed by the call of President Lincoln for 75,000 troops to suppress the rebellion, found young Handerson again employed as tutor, this time in the family of General G. Mason Graham, a veteran of the Mexican war.

With his friends and acquaintances, Handerson joined a company of "homeguards" consisting mostly of planters and their sons, formed for the purpose of maintaining "order among the negroes and other suspicious characters of the vicinity."