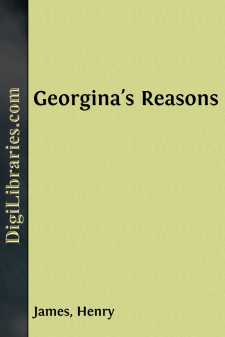 She was certainly a singular girl, and if he felt at the end that he did n't know her nor understand her, it is not surprising that he should have felt it at the beginning. But he felt at the beginning what he did not feel at the end, that her singularity took the form of a charm which—once circumstances had made them so intimate—it was impossible to resist or conjure away. He had a strange impression (it amounted at times to a positive distress, and shot through the sense of pleasure—morally speaking—with the acuteness of a sudden twinge of neuralgia) that it would be better for each of them that they should break off short and never see each other again. In later years he called this feeling a foreboding, and remembered two or three occasions when he had been on the point of expressing it to Georgina. Of course, in fact, he never expressed it; there were plenty of good reasons for that. Happy love is not disposed to assume disagreeable duties, and Raymond Benyon's love was happy, in spite of grave presentiments, in spite of the singularity of his mistress and the insufferable rudeness of her parents. She was a tall, fair girl, with a beautiful cold eye and a smile of which the perfect sweetness, proceeding from the lips, was full of compensation; she had auburn hair of a hue that could be qualified as nothing less than gorgeous, and she seemed to move through life with a stately grace, as she would have walked through an old-fashioned minuet. Gentlemen connected with the navy have the advantage of seeing many types of women; they are able to compare the ladies of New York with those of Valparaiso, and those of Halifax with those of the Cape of Good Hope. Eaymond Benyon had had these advantages, and being very fond of women he had learnt his lesson; he was in a position to appreciate Georgina Gressie's fine points. She looked like a duchess,—I don't mean that in foreign ports Benyon had associated with duchesses,—and she took everything so seriously. That was flattering for the young man, who was only a lieutenant, detailed for duty at the Brooklyn navy-yard, without a penny in the world but his pay, with a set of plain, numerous, seafaring, God-fearing relations in New Hampshire, a considerable appearance of talent, a feverish, disguised ambition, and a slight impediment in his speech.

He was a spare, tough young man, his dark hair was straight and fine, and his face, a trifle pale, was smooth and carefully drawn. He stammered a little, blushing when he did so, at long intervals. I scarcely know how he appeared on shipboard, but on shore, in his civilian's garb, which was of the neatest, he had as little as possible an aroma of winds and waves. He was neither salt nor brown, nor red, nor particularly "hearty." He never twitched up his trousers, nor, so far as one could see, did he, with his modest, attentive manner, carry himself as one accustomed to command. Of course, as a subaltern, he had more to do in the way of obeying. He looked as if he followed some sedentary calling, and was, indeed, supposed to be decidedly intellectual....