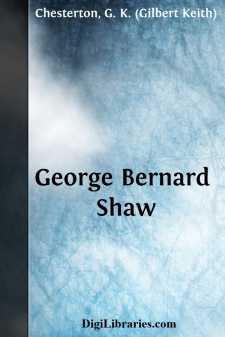 The Problem of a Preface

A peculiar difficulty arrests the writer of this rough study at the very start. Many people know Mr. Bernard Shaw chiefly as a man who would write a very long preface even to a very short play. And there is truth in the idea; he is indeed a very prefatory sort of person. He always gives the explanation before the incident; but so, for the matter of that, does the Gospel of St. John. For Bernard Shaw, as for the mystics, Christian and heathen (and Shaw is best described as a heathen mystic), the philosophy of facts is anterior to the facts themselves. In due time we come to the fact, the incarnation; but in the beginning was the Word.

This produces upon many minds an impression of needless preparation and a kind of bustling prolixity. But the truth is that the very rapidity of such a man's mind makes him seem slow in getting to the point. It is positively because he is quick-witted that he is long-winded. A quick eye for ideas may actually make a writer slow in reaching his goal, just as a quick eye for landscapes might make a motorist slow in reaching Brighton. An original man has to pause at every allusion or simile to re-explain historical parallels, to re-shape distorted words. Any ordinary leader-writer (let us say) might write swiftly and smoothly something like this: "The element of religion in the Puritan rebellion, if hostile to art, yet saved the movement from some of the evils in which the French Revolution involved morality." Now a man like Mr. Shaw, who has his own views on everything, would be forced to make the sentence long and broken instead of swift and smooth. He would say something like: "The element of religion, as I explain religion, in the Puritan rebellion (which you wholly misunderstand) if hostile to art—that is what I mean by art—may have saved it from some evils (remember my definition of evil) in which the French Revolution—of which I have my own opinion—involved morality, which I will define for you in a minute." That is the worst of being a really universal sceptic and philosopher; it is such slow work. The very forest of the man's thoughts chokes up his thoroughfare. A man must be orthodox upon most things, or he will never even have time to preach his own heresy.

Now the same difficulty which affects the work of Bernard Shaw affects also any book about him. There is an unavoidable artistic necessity to put the preface before the play; that is, there is a necessity to say something of what Bernard Shaw's experience means before one even says what it was. We have to mention what he did when we have already explained why he did it. Viewed superficially, his life consists of fairly conventional incidents, and might easily fall under fairly conventional phrases. It might be the life of any Dublin clerk or Manchester Socialist or London author. If I touch on the man's life before his work, it will seem trivial; yet taken with his work it is most important. In short, one could scarcely know what Shaw's doings meant unless one knew what he meant by them....