Games For All Occasions 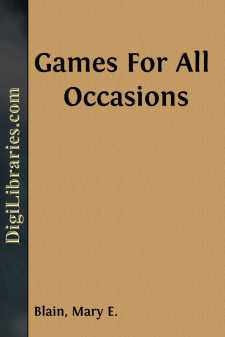 Form a long line of children—one behind the other. The leader starts running, and is followed by all the rest. They must be sharp enough to do exactly as the leader does.

Finally the leader runs slowly round and round into the centre, and can either wind the children up tightly or can turn them on nearing the centre and run out again. For another change the long line can start running and so unwind the spiral.

All stand in a line except one who is the leader who stands a short distance opposite the line.

If the leader fails to catch the bag he must go to the foot of the line and the one at the head of the line takes his place.

This is a very simple game. Each player places a finger on the table, which he must raise whenever the conductor of the game says: "Birds fly," "Pigeons fly," or any other winged creatures "fly."

If he names any creature without wings, such as "Pigs fly," and any player thoughtlessly raises his finger, that player must pay a forfeit, as he must also do if he omits to raise his finger when a winged creature is named.

All the children except the one who passes the button sit in a circle with hands placed palm to palm in their laps.

The child passing the button holds it between her palms and goes to each one, in turn, slipping her hands between the palms of the children. As she goes around the circle she drops the button into some child's hands, but continues going around as long after as she pleases, so the rest will not know who has it.

Then she stands in the middle of the circle and says: "Button, button, who has the button?" All the children guess who has it, the one calling out the correct name first is out and it is his turn to go around with the button.

One child represents the miller, the rest stand round him in a circle, and all dance round and sing the verse. When it comes to the spelling part of the rhyme, the miller points to a child who must call out the right letter.

Anyone who makes a mistake must pay a forfeit.

Before beginning to play, the middle of the room should be cleared, the chairs placed against the wall, and all toys and footstools put out of the way....