Fundamentals of Prosperity What They Are and Whence They Come 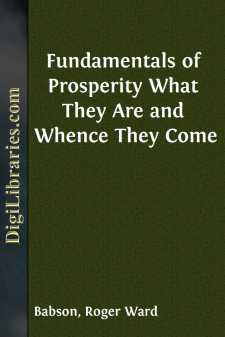 Some two thousand years ago the greatest teacher who ever walked the earth advised the people of Judea not to build their houses on the sand. What he had in mind was that they were looking too much to the structure above ground, and too little to the spiritual forces which must be the foundation of any structure which is to stand. Following the war we enjoyed the greatest prosperity this country has ever witnessed;—the greatest activity, the greatest bank clearings, the greatest foreign trade, the greatest railroad gross earnings, the highest commodity prices.

We then constructed a ten-story building on a foundation meant for only a two or three story building. Hence the problem confronting us business men is to strengthen the foundation or else see the structure fall. I am especially glad of the opportunity to write for business men. There are two reasons:—first, because I feel that the business men are largely responsible for having this ten-story structure on a foundation made for one of only two or three stories; secondly, because I believe such men alone have the vision, the imagination and the ability to strengthen the foundation and prevent the structure from falling.

The fact is, we have become crazy over material things. We are looking only at the structure above ground. We are trying to get more smoke from the chimney. We are looking at space instead of service, at profits instead of volume. With our eyes focused on the structure above ground, we have lost sight of those human resources, thrift, imagination, integrity, vision and faith which make the structure possible. I feel that only by the business men can this foundation be strengthened before the inevitable fall comes.

When steel rails were selling at $55 a ton, compared with only $25 a ton a few years previous, our steel plants increased their capacity twenty-five per cent. Increased demand, you say? No, the figures don’t show it. Only thirty-one million tons were produced in 1919, compared with thirty-nine million tons in 1916. People have forgotten the gospel of service. The producing power per man has fallen off from fifteen to twenty per cent. We have all been keen on developing consumption. We have devoted nine-tenths of our thought, energy and effort to developing consumption. This message is to beg of every reader to give more thought to developing production, to the reviving of a desire to produce and the realization of joy in production.

We are spending millions and millions in every city to develop the good-will of customers, to develop in customers a desire to buy. This is all well and good, but we can’t continue to go in one direction indefinitely. We cannot always get steam out of the boiler without feeding the furnace. The time has come when in our own interests, in the interests of our communities, our industry, and of the nation itself, for a while we must stop adding more stories to this structure. Instead, we must strengthen the foundations upon which the entire structure rests....