From Sea to Sea Letters of Travel 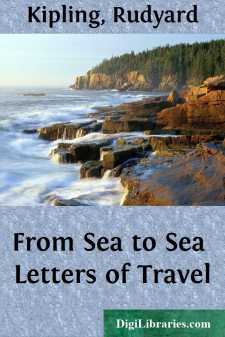 Except for those who, under compulsion of a sick certificate, are flying Bombaywards, it is good for every man to see some little of the great Indian Empire and the strange folk who move about it. It is good to escape for a time from the House of Rimmon—be it office or cutchery—and to go abroad under no more exacting master than personal inclination, and with no more definite plan of travel than has the horse, escaped from pasture, free upon the countryside. The first result of such freedom is extreme bewilderment, and the second reduces the freed to a state of mind which, for his sins, must be the normal portion of the Globe-trotter—the man who "does" kingdoms in days and writes books upon them in weeks. And this desperate facility is not as strange as it seems. By the time that an Englishman has come by sea and rail via America, Japan, Singapur, and Ceylon, to India, he can—these eyes have seen him do so—master in five minutes the intricacies of the Indian Bradshaw, and tell an old resident exactly how and where the trains run. Can we wonder that the intoxication of success in hasty assimilation should make him overbold, and that he should try to grasp—but a full account of the insolent Globe-trotter must be reserved. He is worthy of a book. Given absolute freedom for a month, the mind, as I have said, fails to take in the situation and, after much debate, contents itself with following in old and well-beaten ways—paths that we in India have no time to tread, but must leave to the country cousin who wears his pagri tail-fashion down his back, and says "cabman" to the driver of the ticca-ghari.

Now, Jeypore from the Anglo-Indian point of view is a station on the Rajputana-Malwa line, on the way to Bombay, where half an hour is allowed for dinner, and where there ought to be more protection from the sun than at present exists. Some few, more learned than the rest, know that garnets come from Jeypore, and here the limits of our wisdom are set. We do not, to quote the Calcutta shopkeeper, come out "for the good of our 'ealth," and what touring we accomplish is for the most part off the line of rail.

For these reasons, and because he wished to study our winter birds of passage, one of the few thousand Englishmen in India on a date and in a place which have no concern with the story, sacrificed all his self-respect and became—at enormous personal inconvenience—a Globe-trotter going to Jeypore, and leaving behind him for a little while all that old and well-known life in which Commissioners and Deputy-Commissioners, Governors and Lieutenant-Governors, Aides-de-camp, Colonels and their wives, Majors, Captains, and Subalterns after their kind move and rule and govern and squabble and fight and sell each other's horses and tell wicked stories of their neighbours. But before he had fully settled into his part or accustomed himself to saying, "Please take out this luggage," to the coolies at the stations, he saw from the train the Taj wrapped in the mists of the morning.

There is a story of a Frenchman who feared not God, nor regarded man, sailing to Egypt for the express purpose of scoffing at the Pyramids and—though this is hard to believe—at the great Napoleon who had warred under their shadow. It is on record that that blasphemous Gaul came to the Great Pyramid and wept through mingled reverence and contrition; for he sprang from an emotional race. To understand his feelings it is necessary to have read a great deal too much about the Taj, its design and proportions; to have seen execrable pictures of it at the Simla Fine Arts Exhibition, to have had its praises sung by superior and travelled friends till the brain loathed the repetition of the word; and then, sulky with want of sleep, heavy-eyed, unwashed, and chilled, to come upon it suddenly. Under these circumstances everything, you will concede, is in favour of a cold, critical, and not too impartial verdict. As the Englishman leaned out of the carriage he saw first an opal-tinted cloud on the horizon, and, later, certain towers. The mists lay on the ground, so that the Splendour seemed to be floating free of the earth; and the mists rose in the background, so that at no time could everything be seen clearly. Then as the train sped forward, and the mists shifted, and the sun shone upon the mists, the Taj took a hundred new shapes, each perfect and each beyond description. It was the Ivory Gate through which all good dreams come; it was the realization of "the gleaming halls of dawn" that Tennyson sings of; it was veritably the "aspiration fixed," the "sigh made stone" of a lesser poet; and, over and above concrete comparisons, it seemed the embodiment of all things pure, all things holy, and all things unhappy....