For Love of the King a Burmese Masque 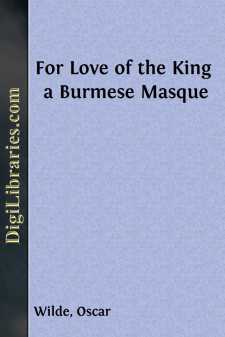 The palace of the king of burmah.  The scene is laid in the Hall of a Hundred Doors.  In the distance can be seen the moat, the waiting elephants, and the peacocks promenading proudly in the blinding sunshine of late afternoon.  The scene discovers king meng beng seated on a raised cushion sewn with rubies, under a canopy supported by four attendants, motionless as bronze figures.  By his side is a betel-nut box, glittering with gems.  On either side of him, but much lower down, are the two ambassadors of the king of ceylon, bearers of the King of Ceylon’s consent to the marriage of his only daughter to Meng Beng in two years’ time, men of grave, majestic mien, clad in flowing robes almost monastic in their white simplicity.  They smoke gravely at the invitation of meng beng.

Round about are grouped the courtiers, the poonygees, and the kneeling servants, while in the background wait the dancing girls.  Banners, propelled with a measured rhythm, create an agreeable breeze.  On a great table of gold stand goblets of gold and heaped-up fruits.  Everywhere will be observed the emblems of the Royal Peacock and the Sacred White Elephant.  Burmese musical instruments sound an abrupt but charming discord.  The poinsettias flower punctuates points of deepest colour from out of vases fashioned like the lotus.  Orchids are everywhere.  The indescribable scent of Burmah steals across the footlights.  The glow, the colour, the sun-swept vista sweeps across the senses.  the king claps his hands.  The dancing girls, at the signal, advance.  They are clad in dresses made of fish scales, which are fastened with diamonds and pale emeralds, to imitate the upthrown spray on the crest of a wave.  The dance concluded, the cingalese ambassadors rise and prepare to take ceremonious leave of the king, who hands to them, through his vizier, his message to His Majesty of Ceylon, inscribed on palm leaves and enclosed in a bejewelled casket.

the king expresses a desire for rest before starting by the Moon of Taboung for the Pagoda of Golden Flowers.

Exit meng beng (C.), an alcove of satin hangings which commands a view of the great hall.

The Crowd break up into groups.  u. rai gyan thoo and moung pho mhin converse on the tendency of the King to interference in affairs of State; his extreme youth and delicacy of temperament; the pity that the marriage is to be so long delayed; the necessity to find him some distraction in the meantime.

Suddenly the tom-toms sound loudly.  There is much movement.  The moon rises over the sea.  Torches flare as the attendants move to and fro in the gardens beyond.

The White Elephant of the King, with its trappings of gold, is led to the entrance where, at a word, it sinks obediently to the ground.

the king appears.  He has changed his gay apple-green dress to one of more sombre hue.  He enters the howdah—the elephant rises—the procession starts.  It consists of not fewer than two hundred persons, keeping in view of the audience until lost by a bend in the avenue.

THE PAGODA OF GOLDEN FLOWERS

Surrounded by Peepul-trees, the great Htee, with its crown of a myriad jewels, rises towards the violet, star-studded sky, its golden bells tinkling in a soft night-wind.

When the curtain rises, the circular platform is deserted.  Statues of Buddha seated and recumbent fill the numberless niches in the wall, and before each burn long candles; heaped-up pink roses and japonica on brass trays are lit from above by swinging coloured lamps.  At intervals are stalls laden with fruit and cheroots.  All is mysterious, solemn, beautiful.

A deep Burmese gong tolls.  People emerge from the four staircases that lead up to the platform.  Men, women, and children, all in gala attire.  The young people conversing, gesticulating, smiling.  The older people, more subdued, carry beads and votive offering to Buddha.  Charming Burmese girls, with huge cigars, meet and greet handsome Burmese men smoking cheroots and wearing flowers in their ears.  Children play silently with coloured balls.  In the corners, under canopies, are seated fortune-tellers, busy casting horoscopes.  It is a veritable riot of colour, with never a discordant note.