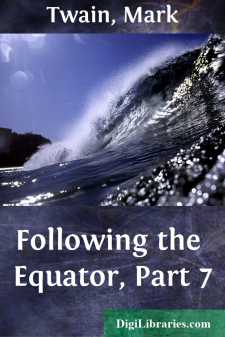 In the first place God made idiots. This was for practice. Then He made School Boards.

Suppose we applied no more ingenuity to the instruction of deaf and dumb and blind children than we sometimes apply in our American public schools to the instruction of children who are in possession of all their faculties? The result would be that the deaf and dumb and blind would acquire nothing. They would live and die as ignorant as bricks and stones. The methods used in the asylums are rational. The teacher exactly measures the child's capacity, to begin with; and from thence onwards the tasks imposed are nicely gauged to the gradual development of that capacity, the tasks keep pace with the steps of the child's progress, they don't jump miles and leagues ahead of it by irrational caprice and land in vacancy—according to the average public-school plan. In the public school, apparently, they teach the child to spell cat, then ask it to calculate an eclipse; when it can read words of two syllables, they require it to explain the circulation of the blood; when it reaches the head of the infant class they bully it with conundrums that cover the domain of universal knowledge. This sounds extravagant—and is; yet it goes no great way beyond the facts.

I received a curious letter one day, from the Punjab (you must pronounce it Punjawb). The handwriting was excellent, and the wording was English—English, and yet not exactly English. The style was easy and smooth and flowing, yet there was something subtly foreign about it—A something tropically ornate and sentimental and rhetorical. It turned out to be the work of a Hindoo youth, the holder of a humble clerical billet in a railway office. He had been educated in one of the numerous colleges of India. Upon inquiry I was told that the country was full of young fellows of his like. They had been educated away up to the snow-summits of learning—and the market for all this elaborate cultivation was minutely out of proportion to the vastness of the product. This market consisted of some thousands of small clerical posts under the government—the supply of material for it was multitudinous. If this youth with the flowing style and the blossoming English was occupying a small railway clerkship, it meant that there were hundreds and hundreds as capable as he, or he would be in a high place; and it certainly meant that there were thousands whose education and capacity had fallen a little short, and that they would have to go without places. Apparently, then, the colleges of India were doing what our high schools have long been doing—richly over-supplying the market for highly-educated service; and thereby doing a damage to the scholar, and through him to the country.

At home I once made a speech deploring the injuries inflicted by the high school in making handicrafts distasteful to boys who would have been willing to make a living at trades and agriculture if they had but had the good luck to stop with the common school. But I made no converts. Not one, in a community overrun with educated idlers who were above following their fathers' mechanical trades, yet could find no market for their book-knowledge....