Folk Tales Every Child Should Know 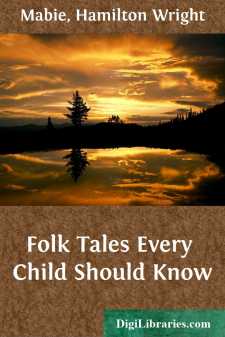 I HANS IN LUCK

Hans had served his Master seven years, and at the end of that time he said to him: "Master, since my time is up, I should like to go home to my mother; so give me my wages, if you please."

His Master replied, "You have served me truly and honestly, Hans, and such as your service was, such shall be your reward;" and with these words he gave him a lump of gold as big as his head. Hans thereupon took his handkerchief out of his pocket, and, wrapping the gold up in it, threw it over his shoulder and set out on the road toward his native village. As he went along, carefully setting one foot to the ground before the other, a horseman came in sight, trotting gaily and briskly along upon a capital animal. "Ah," said Hans, aloud, "what a fine thing that riding is! one is seated, as it were, upon a stool, kicks against no stones, spares one's shoes, and gets along without any trouble!"

The Rider, overhearing Hans making these reflections, stopped and said, "Why, then, do you travel on foot, my fine fellow?"

"Because I am forced," replied Hans, "for I have got a bit of a lump to carry home; it certainly is gold, but then I can't carry my head straight, and it hurts my shoulder."

"If you like we will exchange," said the Rider. "I will give you my horse, and you can give me your lump of gold."

"With all my heart," cried Hans; "but I tell you fairly you undertake a very heavy burden."

The man dismounted, took the gold, and helped Hans on to the horse, and, giving him the reins into his hands, said, "Now, when you want to go faster, you must chuckle with your tongue and cry, 'Gee up! gee up!'"

Hans was delighted indeed when he found himself on the top of a horse, and riding along so freely and gaily. After a while he thought he should like to go rather quicker, and so he cried, "Gee up! gee up!" as the man had told him. The horse soon set off at a hard trot, and, before Hans knew what he was about, he was thrown over head and heels into a ditch which divided the fields from the road. The horse, having accomplished this feat, would have bolted off if he had not been stopped by a Peasant who was coming that way, driving a cow before him. Hans soon picked himself up on his legs, but he was terribly put out, and said to the countryman, "That is bad sport, that riding, especially when one mounts such a beast as that, which stumbles and throws one off so as to nearly break one's neck. I will never ride on that animal again. Commend me to your cow: one may walk behind her without any discomfort, and besides one has, every day for certain, milk, butter, and cheese. Ah! what would I not give for such a cow!"

"Well," said the Peasant, "such an advantage you may soon enjoy; I will exchange my cow for your horse."

To this Hans consented with a thousand thanks, and the Peasant, swinging himself upon the horse, rode off in a hurry.

Hans now drove his cow off steadily before him, thinking of his lucky bargain in this wise: "I have a bit of bread, and I can, as often as I please, eat with it butter and cheese, and when I am thirsty I can milk my cow and have a draught: and what more can I desire?"

As soon, then, as he came to an inn he halted, and ate with great satisfaction all the bread he had brought with him for his noonday and evening meals, and washed it down with a glass of beer, to buy which he spent his two last farthings. This over, he drove his cow farther, but still in the direction of his mother's village. The heat meantime became more and more oppressive as noontime approached, and just then Hans came to a common which was an hour's journey across. Here he got into such a state of heat that his tongue clave to the roof of his mouth, and he thought to himself: "This won't do; I will just milk my cow, and refresh myself." Hans, therefore tied her to a stump of a tree, and, having no pail, placed his leathern cap below, and set to work, but not a drop of milk could he squeeze out....