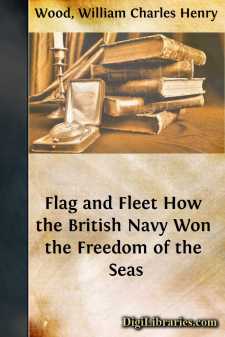 Count me the splendid captainsWho sailed with courage highTo chart the perilous ways unknown—Tell me where these men lie!To light a path for ships to comeThey moored at Dead Man's quay;The Sea is God's—He made it,And these men made it free.

[Frontispiece: VIKING MAN-OF-WAR.] FLAG AND FLEET HOW THE BRITISH NAVY WON THEFREEDOM OF THE SEAS BYWILLIAM WOOD Lieutenant-Colonel, Canadian Militia;Member of the Canadian Special Mission Overseas;Editor of "The Logs of the Conquest of Canada";Author of "All Afloat: A Chronicle of Craft and Waterways";"Elizabethan Sea Dogs: A Chronicle of Drake and his Companions";and "The Fight for Canada: A Naval and Military Sketch." WITH A PREFACE BYADMIRAL-OF-THE-FLEET SIR DAVID BEATTYG.C.B., O.M., G.C.V.O., Etc., Etc. TORONTO: THE MACMILLAN COMPANYOF CANADA, LTD., AT ST. MARTIN'S HOUSE1919 COPYRIGHT, CANADA, 1919, BYTHE MACMILLAN COMPANY OF CANADA, LIMITED ToAdmiral-of-the-FleetLord JellicoeIn token of deep admirationAnd in gratitude for many kindnesses during the Great WarI dedicate this little book,Which, published under the auspices ofThe Navy League of Canadaand approved by the Provincial Departments of Education,Is written for the reading ofCanadian Boys and Girls PREFACE

In acceding to the request to write a Preface for this volume I am moved by the paramount need that all the budding citizens of our great Empire should be thoroughly acquainted with the part the Navy has played in building up the greatest empire the world has ever seen.

Colonel Wood has endeavored to make plain, in a stirring and attractive manner, the value of Britain's Sea-Power. To read his Flag and Fleet will ensure that the lessons of centuries of war will be learnt, and that the most important lesson of them all is this—that, as an empire, we came into being by the Sea, and that we cannot exist without the Sea.

Who wants to be a raw recruit for life, all thumbs and muddle-mindedness? Well, that is what a boy or girl is bound to be when he or she grows up without knowing what the Royal Navy of our Motherland has done to give the British Empire birth, life, and growth, and all the freedom of the sea.

The Navy is not the whole of British sea-power; for the Merchant Service is the other half. Nor is the Navy the only fighting force on which our liberty depends; for we depend upon the United Service of sea and land and air....