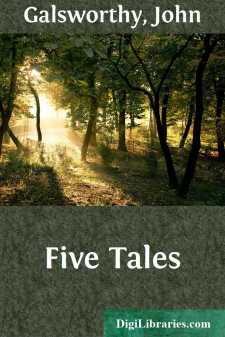 THE FIRST AND LAST "So the last shall be first, and the first last."—HOLY WRIT.

It was a dark room at that hour of six in the evening, when just the single oil reading-lamp under its green shade let fall a dapple of light over the Turkey carpet; over the covers of books taken out of the bookshelves, and the open pages of the one selected; over the deep blue and gold of the coffee service on the little old stool with its Oriental embroidery. Very dark in the winter, with drawn curtains, many rows of leather-bound volumes, oak-panelled walls and ceiling. So large, too, that the lighted spot before the fire where he sat was just an oasis. But that was what Keith Darrant liked, after his day's work—the hard early morning study of his "cases," the fret and strain of the day in court; it was his rest, these two hours before dinner, with books, coffee, a pipe, and sometimes a nap. In red Turkish slippers and his old brown velvet coat, he was well suited to that framing of glow and darkness. A painter would have seized avidly on his clear-cut, yellowish face, with its black eyebrows twisting up over eyes—grey or brown, one could hardly tell, and its dark grizzling hair still plentiful, in spite of those daily hours of wig. He seldom thought of his work while he sat there, throwing off with practised ease the strain of that long attention to the multiple threads of argument and evidence to be disentangled—work profoundly interesting, as a rule, to his clear intellect, trained to almost instinctive rejection of all but the essential, to selection of what was legally vital out of the mass of confused tactical and human detail presented to his scrutiny; yet sometimes tedious and wearing. As for instance to-day, when he had suspected his client of perjury, and was almost convinced that he must throw up his brief. He had disliked the weak-looking, white-faced fellow from the first, and his nervous, shifty answers, his prominent startled eyes—a type too common in these days of canting tolerations and weak humanitarianism; no good, no good!

Of the three books he had taken down, a Volume of Voltaire—curious fascination that Frenchman had, for all his destructive irony!—a volume of Burton's travels, and Stevenson's "New Arabian Nights," he had pitched upon the last. He felt, that evening, the want of something sedative, a desire to rest from thought of any kind. The court had been crowded, stuffy; the air, as he walked home, soft, sou'-westerly, charged with coming moisture, no quality of vigour in it; he felt relaxed, tired, even nervy, and for once the loneliness of his house seemed strange and comfortless.

Lowering the lamp, he turned his face towards the fire. Perhaps he would get a sleep before that boring dinner at the Tellasson's. He wished it were vacation, and Maisie back from school. A widower for many years, he had lost the habit of a woman about him; yet to-night he had a positive yearning for the society of his young daughter, with her quick ways, and bright, dark eyes....