Five Pebbles from the Brook 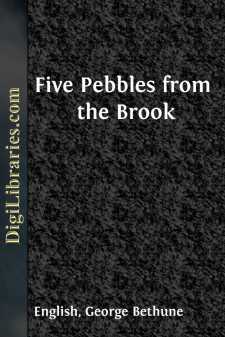 WHEN I left America, I had no intention of giving Mr. Everett's book a formal answer: but having learned since my arrival in the Old World, that: the controversy in which I had engaged myself had attracted some attention, and had been reviewed by a distinguished member of a German university, my hopes of being serviceable to the cause of truth and philanthrophy are revived, and I have therefore determined to give a reply to Mr. Everett's publication.

In this Work, as in my prior writings, I have taken for granted the Divine Authority of the Old Testament, and I have argued upon the principle that every book, claiming to be considered as a Divine revelation and building itself upon the Old Testament as upon a foundation, must agree with it, otherwise the superstructure cannot stand. The New Testament, the Talmud, and the Koran are all placed by their authors upon the Law and the Prophets, as an edifice is upon its foundation; and if it be true that any or all of them be found to be irreconcileable with the primitive Revelation to which they all refer themselves, the question as to their Divine Authority is decided against them, most obviously and completely.

This work was written in Egypt and forwarded to the U. States, while I was preparing to accompany Ismael Pacha to the conquest of Ethiopia; an expedition in which I expected to perish, and therefore felt it to be my duty to leave behind me, something from which my countrymen might learn what were my real sentiments upon a most important and interesting subject; and as I hoped would learn too, how grossly they had been deluded into building their faith and hope upon a demonstrated error.

On my arrival from Egypt I found that the MS. had not been published, and I was advised by several, of my friends to abandon the struggle and to imitate their example; in submitting to the despotism of popular opinion, which, they said, it was imprudent to oppose. I was so far influenced by these representations— extraordinary indeed in a country which boasts that here freedom of opinion and of speech is established by law—that I intended to confine myself to sending the MS. to Mr. Everett; in the belief that when he should have the weakness of his arguments in behalf of what he defended and the injustice of his aspersions upon me, fairly and evidently laid before him, that he would make me at least a private apology. He chose to preserve a sullen silence, probably believing that he is so securely seated in the saddle which his brethren have girthed upon the back of "a strong ass" that; there is no danger that the animal will give him a fall.

Not a little moved at this, I determined to do my myself justice, and to publish the pages following.

This book is not the work of an Infidel. I am not an infidel; what I have learned and seen in Europe, Asia and Africa, while it has confirmed my reasons for rejecting the New Testament, has rooted in my mind the conviction that the ancient Bible does contain a revelation from the God of Nature, as firmly as my belief in the first proposition of Euclid....