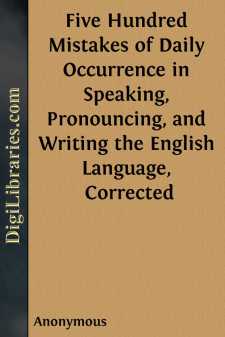 This book is offered to the public, not to be classed with elaborate or learned works, nor expected, like some of its more pretending companions among the offspring of the press, to run the gauntlet of literary criticism. It was prepared to meet the wants of persons—numbered by multitudes in even the most intelligent and refined communities—who from deficiency of education, or from carelessness of manner, are in the habit of misusing many of the most common words of the English language, distorting its grammatical forms, destroying its beauty, and corrupting its purity. The most thorough mode that could be adopted to correct such errors, would doubtless be to impart to the ignorant a practical knowledge of the principles of language, as embodied in treatises on grammar; but such a good work, however desirable its results, has, in time past, been too difficult for the promoters of education to complete, and is still too great to give promise of speedy accomplishment. A better expedient, bearing immediate fruits, has been adopted in the present volume, which, while it does not aim to produce a radical reform, cannot fail to render great service to those who need to improve their usual modes of expression, and to be more discriminating in their choice of words.

The more frequent and less excusable mistakes that may be noticed in ordinary conversation or correspondence, are here taken up, one by one—exposed, explained, and corrected. They consist variously of abuses of grammar, misapplications of words and phrases, improprieties of metaphor and comparison, misstatements of meaning, and faults of pronunciation. They are grouped miscellaneously, without classification, not so much because of the difficulty of devising an arrangement that would be systematic and intelligible, as from the evident fact that a division of subjects would render no assistance to those for whom the book is specially designed; for an appropriate classification would necessarily derive its features from the forms of grammar, and with these the readers of this book are supposed to be to a great extent unfamiliar.

The volume is put forth with no flourish of trumpets, and makes no extravagant pretensions; yet the publishers believe it will be regarded as a timely and useful work. If the race of critics should not like it—and while books have their “faults,” critics have their “failings”—they are reminded that he who corrects an old error, may render no less service to his brethren, than he who discovers a new truth. If the work shall be the means of saving one sensitive man from a confusion of blushes, in the presence of a company before which he desired to preserve his equanimity, it will not have gone forth without a mission of benefit, which will merit at least one acknowledgment.

The aim of this book, by correcting a multitude of common errors in the use of language, is mainly to offer assistance to such persons as need greater facilities for accurate expression in ordinary conversation....