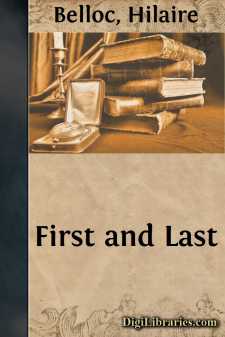 The Roman Roads in Picardy

If a man were asked where he would find upon the map the sharpest impress of Rome and of the memories of Rome, and where he would most easily discover in a few days on foot the foundations upon which our civilization still rests, he might, in proportion to his knowledge of history and of Europe, be puzzled to reply. He might say that a week along the wall from Tyne to Solway would be the answer; or a week in the great Roman cities of Provence with their triumphal arches and their vast arenas and their Roman stone cropping out everywhere: in old quays, in ruined bridges, in the very pavement of the streets they use to-day, and in the columns of their living churches.

Now I was surprised to find myself after many years of dabbling in such things, furnishing myself the answer in quite a different place. It was in Picardy during the late manoeuvres of the French Army that, in the intervals of watching those great buzzing flies, the aeroplanes, and in the intervals of long tramps after the regiments or of watching the massed guns, the necessity for perpetually consulting the map brought home to me for the first time this truth--that Picardy is the province--or to be more accurate, Picardy with its marches in the Île de France, the edge of Normandy and the edge of Flanders--which retains to-day the most vivid impress of Rome. For though the great buildings are lacking, and the Roman work, which must here have been mainly of brick, has crumbled, and though I can remember nothing upstanding and patently of the Empire between the gate of Rheims and the frontier of Artois, yet one feature--the Roman road--is here so evident, so multiple, and so enduring that it makes up for all the rest.

One discovers the old roads upon the map, one after the other, with a sort of surprise. The scheme develops before one as one looks, and always when one thinks one has completed the web another and yet another straight arrow of a line reveals itself across the page.

The map is a sort of palimpsest. A mass of fine modern roads, a whole red blur of lanes and local ways, the big, rare black lines of the railway--these are the recent writing, as it were; but underneath the whole, more and more apparent and in greater and greater numbers as one learns to discover them, are the strict, taut lines which Rome stretched over all those plains.

There is something most fascinating in noting them, and discovering them one after the other.

For they need discovering. No one of them is still in complete use. The greater part must be pieced together from lengths of lanes which turn into broad roads, and then suddenly sink again into footpaths, rights of way, or green forest rides.

Often, as with our rarer Roman roads in England, all trace of the thing disappears under the plough or in the soft crossings of the river valleys; one marks them by the straightness of their alignment, by the place names which lie upon them (the repeated name Estree, for instance, which is like the place name "street" upon the Roman roads of England); by the recovery of them after a gap; by the discoveries which local archaeology has made....