Fiesco; or, the Genoese Conspiracy 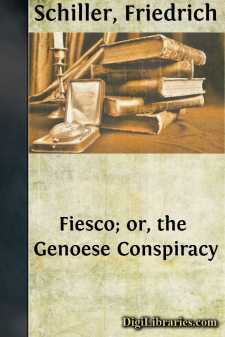 ACT I. SCENE I. A Saloon in FIESCO'S House. The distant sound of dancing andmusic is heard.

LEONORA, masked, and attended by ROSA and ARABELLA, enters hastily.

LEONORA (tears off her mask). No more! Not another word! 'Tis as clear as day! (Throwing herself in a chair.) This quite overcomes me——

LEONORA (rising.) What, before my eyes! with a notorious coquette! In presence of the whole nobility of Genoa! (strongly affected.)—Rosa! Arabella! and before my weeping eyes!

ROSA. Look upon it only as what it really was—a piece of gallantry. It was nothing more.

LEONORA. Gallantry! What! Their busy interchange of glances—the anxious watching of her every motion—the long and eager kiss upon her naked arm, impressed with a fervor that left in crimson glow the very traces of his lips! Ha! and the transport that enwrapped his soul, when, with fixed eyes, he sate like painted ecstacy, as if the world around him had dissolved, and naught remained in the eternal void but he and Julia. Gallantry? Poor thing! Thou hast never loved. Think not that thou canst teach me to distinguish gallantry from love!

ROSA. No matter, Signora! A husband lost is as good as ten lovers gained.

LEONORA. Lost? Is then one little intermission of the heart's pulsations a proof that I have lost Fiesco? Go, malicious slanderer! Come no more into my presence! 'Twas an innocent frolic—perhaps a mere piece of gallantry. Say, my gentle Arabella, was it not so?

ARABELLA. Most certainly! There can be no doubt of it!

LEONORA (in a reverie). But does she then feel herself sole mistress of his heart? Does her name lurk in his every thought?—meet him in every phase of nature? Can it be? Whither will these thoughts lead me? Is this beautiful and majestic world to him but as one precious diamond, on which her image—her image alone—is engraved? That he should love her? —love Julia! Oh! Your arm—support me, Arabella! (A pause; music is again heard.)

LEONORA (starting). Hark! Was not that Fiesco's voice, which from the tumult penetrated even hither? Can he laugh while his Leonora weeps in solitude? Oh, no, my child, it was the coarse, loud voice of Gianettino.

ARABELLA. It was, Signora—but let us retire to another apartment.

LEONORA. You change color, Arabella—you are false. In your looks, in the looks of all the inhabitants of Genoa, I read a something—a something which—(hiding her face)—oh, certainly these Genoese know more than should reach a wife's ear.

LEONORA (with melancholy enthusiasm). When he was still Fiesco; when in the orange-grove, where we damsels walked, I saw him—a blooming Apollo, blending the manly beauty of Antinous! Such was his noble and majestic deportment, as if the illustrious state of Genoa rested alone upon his youthful shoulders. Our eyes stole trembling glances at him, and shrunk back, as if with conscious guilt, whene'er they encountered the lightning of his looks. Ah, Arabella, how we devoured those looks!...