Faustus his Life, Death, and Doom 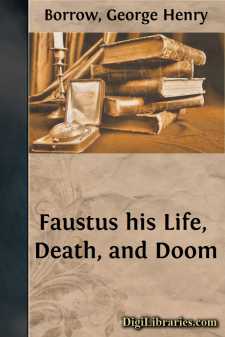 Faustus, having long struggled with the shadows of Theology, the bubbles of Metaphysics, and the ignes-fatui of Morality, without being able to bring his mind to a firm conviction, at length cast himself into the dark fields of Magic, in the hope of forcing from Nature what she had so obstinately withheld from him.  His first attainment was the remarkable invention of Printing; but his second was horrible.  He discovered, almost fortuitously, the dreadful formula by which devils are called out of hell, and made subservient to the will of man.  But as yet he had not exerted his power, out of love to his immortal soul, for whose welfare every Christian is so anxious.  At this period he was in the full bloom of manhood.  Nature had favoured him in his person, and had given him a noble and expressive countenance.  Here was enough to bespeak his happiness in the world; but she superadded pride and untamable impetuosity of mind, which displayed itself in deep determination of purpose, and in the constant workings of a heated imagination, which was never satisfied with the present, but affected to discover the emptiness and insufficiency of the acquired object, even in the zest of its enjoyment.

Faustus soon lost the path by which moderation leads frail mortals to the abode of true happiness.  He soon felt the narrow limits of humanity, and endeavoured to burst their bonds.  By what he had learnt and believed in his youth, he entertained a high opinion of the capacity and moral worth of man; and, in comparing himself with others, he naturally laid the greatest part of the sum-total to his own account.  Here were fine materials for greatness and glory: but true greatness and true glory generally fly from him who is on the point of attaining them, just before he can separate their fine pure forms from the mist and vapour which delusion has shed round them.  It appeared to Faustus that, in his situation, the nearest and most convenient way to honour and reputation would be the sciences; yet scarcely had he tasted their enchantment when his soul became inflamed with an ardent passion after truth.  Every one who is acquainted with these sirens, and has heard their deceitful song, must know that, provided he does not make a mere trade of them, he must infallibly miss his aim, from the necessity of assuaging the burning thirst with which they inspire him.  Faustus, after he had for a long time groped about in the labyrinth, found that his earnings were doubt; displeasure at the short-sightedness of man; and discontent and murmuring against the Being who had formed him.  He might still have been comparatively happy had he had only these feelings to combat: but when the perusal of the sages and the poets awakened a thousand new wants in his soul, and his now winged and artificial imagination conjured up before his eyes the many intoxicating enjoyments which gold and reputation could only procure him, his blood ran like fire through his veins, and all his faculties were soon swallowed up by this sensation.

By the discovery of Printing, Faustus thought he had at length opened the door to riches, honour, and enjoyment.  He exerted himself to the utmost, in order to bring the art to perfection, and he now laid his discovery before mankind; but their lukewarmness quickly convinced him that, although the greatest inventor of his age, he and his family would soon perish with hunger unless his genius continually displayed itself in some new forms.  Hurled from the pinnacle of hope, oppressed by heavy debts,—which he had incurred by generosity and extravagant living, and by his becoming security for false friends,—he now surveyed the world through a gloomy medium.  His domestic ties, when he no longer knew how to support his family, became an intolerable burden.  He began to think that there was a malign influence in the distribution of men’s fortunes: or how did it happen that the noble and intellectual man was every where oppressed, neglected, and in misery; whilst the knave and the fool were rich, prosperous, and honoured in life?

In this melancholy state of mind Faustus wandered from Mayence to Frankfort, intending to sell one of his printed Latin Bibles to the magistracy, and then to return and buy with the produce food for his hungry children.  He had been able to accomplish nothing in his native city, because at that time the Archbishop was at war with the whole Chapter, and all Mayence found itself in the greatest confusion.  The cause was as follows: a Dominican monk had dreamt that he passed the night with his penitent, the lovely Clara, who was a white nun, and a niece of the Archbishop.  In the morning it was his turn to read mass; he did so, and, unabsolved from the night of sin, received the host in his profane hands.  At eve-tide, after a cup or two of Rhenish, he related his dream to a young novice.  The dream tickled the imagination of the novice: he told it with some additions to a monk; and in this manner the story, embellished with horrors and licentiousness, ran through the convent, until it came to the ears of the Prior himself.  This holy man, who hated Father Gebhardt on account of his intimacy with the most respectable houses, was shocked at the scandalousness of the affair, which he considered as a profanation of the holy sacrament; and, refusing to decide on such a weighty matter, he referred it to the Archbishop.  The Archbishop, wisely concluding that whatever sinful man wishes or thinks by day he dreams of by night, denounced the ban of the Church against the monk.  The Chapter, whose hatred to an Archbishop always increases the longer he lives, and gladly seizes every opportunity to annoy him, took Father Gerhardt under its protection, and opposed the ban on these grounds: “It is well known that the Devil tempted St....