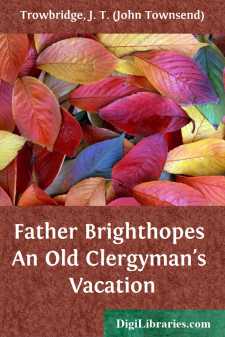 There was an unpleasant scowl on Mr. Royden's face, as he got out of his wagon in the yard, and walked, with a quick pace, towards the rear entrance of his house.

"Samuel!" said he, looking into the wood-shed, "what are you about?"

The sharp tone of voice gave Samuel quite a start. He was filling a small flour-sack with walnuts from a bushel-basket placed upon the work-bench, his left hand holding the mouth of the bag, while his right made industrious use of a tin dipper.

"O, nothing,—nothing much!" he stammered, losing his hold of the sack, and making a hasty attempt to recover it. "There! blast it all!"

The sack had fallen down, and spilled its contents all over his feet.

"What are you doing with those nuts?" demanded Mr. Royden, impatiently.

"Why, you see," replied the lad, grinning sheepishly, as he began to gather up the spilled treasure, "I'm making—a piller."

"A piller,—to sleep on. There an't but two feathers in the one on my bed, and they are so lean I can't feel 'em."

"What foolishness!" muttered Mr. Royden, smiling notwithstanding his ill-humor. "But let your pillow alone for the present, and take care of the horse."

"Then let it fall down; or set it against the wood-pile. Go and do as I bid you."

Samuel reluctantly left his occupation, and went lazily to unharness the horse, while Mr. Royden entered the old-fashioned kitchen.

The appearance of her uncle was anything but agreeable to poor Hepsy Royden, who stood on a stool at the sink,—her deformed little body being very short,—engaged in preparing some vegetables for cooking. Tears were coursing down her sickly cheeks, and her hands being in the water, it was not convenient to wipe her eyes. But, knowing how Mr. Royden hated tears, she made a hasty snatch at a towel to conceal them. He was just in time to observe the movement.

"Now, what is the matter?" he exclaimed, fretfully. "I never see you, lately, but you are crying."

Hepsy choked back her swelling grief, and pursued her work in silence.

"I can't tell. I—I wish I was different," she murmured, consulting the towel again; "but I am not very happy."

"Come, come! cheer up!" rejoined Mr. Royden, more kindly, feeling a slight moisture in his own eyes. "Don't be so down-hearted!"

His words sounded to him like mockery. It was easy to say to a poor, sickly, deformed girl "Be cheerful!" but how could cheerfulness be expected of one in her condition?

He passed hastily into the adjoining room; and Hepsy sobbed audibly over the sink. She was even more miserable than he could conceive of. It was not her unattractive face and curved spine, in themselves, that caused her deep grief,—although she had longed, till her heart ached with longing, to be like her beautiful cousins,—but she felt that she was an unloved one, repulsive even to those who regarded her with friendly pity.

Mr. Royden had left the door unlatched behind him, and Hepsy heard him speak to his wife....