Famous Affinities of History - Volume 2 The Romance of Devotion 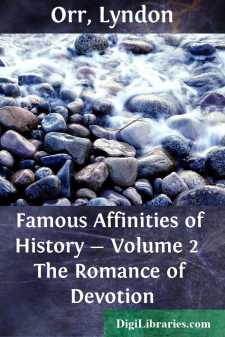 THE EMPRESS CATHARINE AND PRINCE POTEMKIN

It has often been said that the greatest Frenchman who ever lived was in reality an Italian. It might with equal truth be asserted that the greatest Russian woman who ever lived was in reality a German. But the Emperor Napoleon and the Empress Catharine II. resemble each other in something else. Napoleon, though Italian in blood and lineage, made himself so French in sympathy and understanding as to be able to play upon the imagination of all France as a great musician plays upon a splendid instrument, with absolute sureness of touch and an ability to extract from it every one of its varied harmonies. So the Empress Catharine of Russia—perhaps the greatest woman who ever ruled a nation—though born of German parents, became Russian to the core and made herself the embodiment of Russian feeling and Russian aspiration.

At the middle of the eighteenth century Russia was governed by the Empress Elizabeth, daughter of Peter the Great. In her own time, and for a long while afterward, her real capacity was obscured by her apparent indolence, her fondness for display, and her seeming vacillation; but now a very high place is accorded her in the history of Russian rulers. She softened the brutality that had reigned supreme in Russia. She patronized the arts. Her armies twice defeated Frederick the Great and raided his capital, Berlin. Had Elizabeth lived, she would probably have crushed him.

In her early years this imperial woman had been betrothed to Louis XV. of France, but the match was broken off. Subsequently she entered into a morganatic marriage and bore a son who, of course, could not be her heir. In 1742, therefore, she looked about for a suitable successor, and chose her nephew, Prince Peter of Holstein-Gottorp.

Peter, then a mere youth of seventeen, was delighted with so splendid a future, and came at once to St. Petersburg. The empress next sought for a girl who might marry the young prince and thus become the future Czarina. She thought first of Frederick the Great's sister; but Frederick shrank from this alliance, though it would have been of much advantage to him. He loved his sister—indeed, she was one of the few persons for whom he ever really cared. So he declined the offer and suggested instead the young Princess Sophia of the tiny duchy of Anhalt-Zerbst.

The reason for Frederick's refusal was his knowledge of the semi-barbarous conditions that prevailed at the Russian court.

The Russian capital, at that time, was a bizarre, half-civilized, half-oriental place, where, among the very highest-born, a thin veneer of French elegance covered every form of brutality and savagery and lust. It is not surprising, therefore, that Frederick the Great was unwilling to have his sister plunged into such a life.

But when the Empress Elizabeth asked the Princess Sophia of Anhalt-Zerbst to marry the heir to the Russian throne the young girl willingly accepted, the more so as her mother practically commanded it. This mother of hers was a grim, harsh German woman who had reared her daughter in the strictest fashion, depriving her of all pleasure with a truly puritanical severity....