Famous Affinities of History, Vol 1-4, Complete The Romance of Devotion 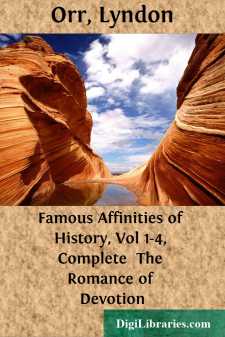 Of all love stories that are known to human history, the love story of Antony and Cleopatra has been for nineteen centuries the most remarkable. It has tasked the resources of the plastic and the graphic arts. It has been made the theme of poets and of prose narrators. It has appeared and reappeared in a thousand forms, and it appeals as much to the imagination to-day as it did when Antony deserted his almost victorious troops and hastened in a swift galley from Actium in pursuit of Cleopatra.

The wonder of the story is explained by its extraordinary nature. Many men in private life have lost fortune and fame for the love of woman. Kings have incurred the odium of their people, and have cared nothing for it in comparison with the joys of sense that come from the lingering caresses and clinging kisses. Cold-blooded statesmen, such as Parnell, have lost the leadership of their party and have gone down in history with a clouded name because of the fascination exercised upon them by some woman, often far from beautiful, and yet possessing the mysterious power which makes the triumphs of statesmanship seem slight in comparison with the swiftly flying hours of pleasure.

But in the case of Antony and Cleopatra alone do we find a man flinging away not merely the triumphs of civic honors or the headship of a state, but much more than these—the mastery of what was practically the world—in answer to the promptings of a woman's will. Hence the story of the Roman triumvir and the Egyptian queen is not like any other story that has yet been told. The sacrifice involved in it was so overwhelming, so instantaneous, and so complete as to set this narrative above all others. Shakespeare's genius has touched it with the glory of a great imagination. Dryden, using it in the finest of his plays, expressed its nature in the title "All for Love."

The distinguished Italian historian, Signor Ferrero, the author of many books, has tried hard to eliminate nearly all the romantic elements from the tale, and to have us see in it not the triumph of love, but the blindness of ambition. Under his handling it becomes almost a sordid drama of man's pursuit of power and of woman's selfishness. Let us review the story as it remains, even after we have taken full account of Ferrero's criticism. Has the world for nineteen hundred years been blinded by a show of sentiment? Has it so absolutely been misled by those who lived and wrote in the days which followed closely on the events that make up this extraordinary narrative?

In answering these questions we must consider, in the first place, the scene, and, in the second place, the psychology of the two central characters who for so long a time have been regarded as the very embodiment of unchecked passion.

As to the scene, it must be remembered that the Egypt of those days was not Egyptian as we understand the word, but rather Greek. Cleopatra herself was of Greek descent. The kingdom of Egypt had been created by a general of Alexander the Great after that splendid warrior's death. Its capital, the most brilliant city of the Greco-Roman world, had been founded by Alexander himself, who gave to it his name. With his own hands he traced out the limits of the city and issued the most peremptory orders that it should be made the metropolis of the entire world. The orders of a king cannot give enduring greatness to a city; but Alexander's keen eye and marvelous brain saw at once that the site of Alexandria was such that a great commercial community planted there would live and flourish throughout out succeeding ages....