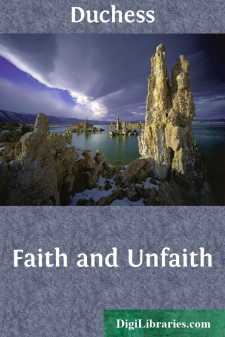 CHAPTER I. "A heap of dust alone remains of thee:'Tis all thou art, and all the proud shall be!"—Pope.

In an upper chamber, through the closed blinds of which the sun is vainly striving to enter, Reginald Branscombe, fifth Earl of Sartoris, lies dead. The sheet is reverently drawn across the motionless limbs; the once restless, now quiet, face is hidden; all around is wrapt in solemn unutterable silence,—the silence that belongs to death alone!

A sense of oppressive calm is upon everything,—a feeling of loneliness, vague and shadowy. The clock has ticked its last an hour ago, and now stands useless in its place. The world without moves on unheeding; the world within knows time no more! Death reigns triumphant! Life sinks into insignificance!

Once, a little flickering golden ray, born of the hot sun outside, flashes in through some unknown chink, and casts itself gleefully upon the fair white linen of the bed. It trembles vivaciously now here, now there, in uncontrollable joyousness, as though seeking in its gayety to mock the grandeur of the King of Terrors! At least so it seems to the sole watcher in the lonely chamber, as with an impatient sigh he raises his head, and, going over to the window, draws the curtains still closer to shut out the obnoxious light; after which he comes back to where he has been standing, gazing down upon, and thinking of, the dead.

He is an old man, tall and gaunt, with kind but passionate eyes, and a mouth expressive of impatience. His hands—withered but still sinewy—are clasped behind his back; every feature in his face is full of sad and anxious thought.

What changes the passing of a few short hours have wrought—so he muses. Yesterday the man now chilled and silent for evermore was as full of animation as he—his brother—who to-day stands so sorrowfully beside his corpse. His blood had run as freely in his veins, his pulses throbbed as evenly, his very voice had been sounding strong and clear and hearty, when Death, remorseless, claimed him for his own.

Poor Reginald! Had he known of the fell disease that had nestled so long within his heart?—or had no symptoms ever shown themselves to give him kindly warning? Certainly no hint of it had ever passed his lips, even to those most near and dear to him. He had lived apparently free from care or painful forebodings of any kind,—a good and useful life too, leaving nothing for those behind (who loved him) to regret. Indeed, of late he had appeared even gayer, happier, than before; and now—

It seems such a little time ago since they both were lads together. A tiny space taken from the great eternity, when all is told. How well the living man remembers at this moment many a boyish freak and light-hearted jest, many a kindness shown and gift bestowed by the dead, that until now had wellnigh been forgotten!

He thinks of the good old college days, when they worked little, and fought hard, and trained their fresh young limbs to mighty deeds, and walked, and rode, and held their own with the best, and showed open defiance of dons and deans and proctors; he lingers, too, on the day still farther on, when Reginald, having attained to his kingdom, lavished with no meagre hand upon his more extravagant brother the money so sorely needed....