Extracts from Adam's Diary, translated from the original ms. 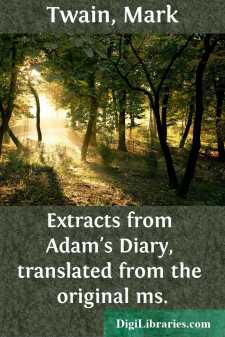 Translated from the original MS.

[NOTE.—I translated a portion of this diary some years ago, and a friend of mine printed a few copies in an incomplete form, but the public never got them. Since then I have deciphered some more of Adam's hieroglyphics, and think he has now become sufficiently important as a public character to justify this publication.—M. T.]

This new creature with the long hair is a good deal in the way. It is always hanging around and following me about. I don't like this; I am not used to company. I wish it would stay with the other animals. Cloudy to-day, wind in the east; think we shall have rain…. Where did I get that word?… I remember now —the new creature uses it.

Been examining the great waterfall. It is the finest thing on the estate, I think. The new creature calls it Niagara Falls—why, I am sure I do not know. Says it looks like Niagara Falls. That is not a reason; it is mere waywardness and imbecility. I get no chance to name anything myself. The new creature names everything that comes along, before I can get in a protest. And always that same pretext is offered—it looks like the thing. There is the dodo, for instance. Says the moment one looks at it one sees at a glance that it "looks like a dodo." It will have to keep that name, no doubt. It wearies me to fret about it, and it does no good, anyway. Dodo! It looks no more like a dodo than I do.

Built me a shelter against the rain, but could not have it to myself in peace. The new creature intruded. When I tried to put it out it shed water out of the holes it looks with, and wiped it away with the back of its paws, and made a noise such as some of the other animals make when they are in distress. I wish it would not talk; it is always talking. That sounds like a cheap fling at the poor creature, a slur; but I do not mean it so. I have never heard the human voice before, and any new and strange sound intruding itself here upon the solemn hush of these dreaming solitudes offends my ear and seems a false note. And this new sound is so close to me; it is right at my shoulder, right at my ear, first on one side and then on the other, and I am used only to sounds that are more or less distant from me.

The naming goes recklessly on, in spite of anything I can do. I had a very good name for the estate, and it was musical and pretty —GARDEN-OF-EDEN. Privately, I continue to call it that, but not any longer publicly. The new creature says it is all woods and rocks and scenery, and therefore has no resemblance to a garden. Says it looks like a park, and does not look like anything but a park. Consequently, without consulting me, it has been new-named —NIAGARA FALLS PARK. This is sufficiently high-handed, it seems to me. And already there is a sign up:

KEEP OFF THE GRASS

My life is not as happy as it was.

The new creature eats too much fruit. We are going to run short, most likely. "We" again—that is its word; mine too, now, from hearing it so much....