Evolution of Theology: an Anthropological Study 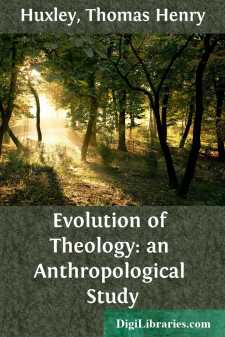 I conceive that the origin, the growth, the decline, and the fall of those speculations respecting the existence, the powers, and the dispositions of beings analogous to men, but more or less devoid of corporeal qualities, which may be broadly included under the head of theology, are phenomena the study of which legitimately falls within the province of the anthropologist. And it is purely as a question of anthropology (a department of biology to which, at various times, I have given a good deal of attention) that I propose to treat of the evolution of theology in the following pages.

With theology as a code of dogmas which are to be believed, or at any rate repeated, under penalty of present or future punishment, or as a storehouse of anaesthetics for those who find the pains of life too hard to bear, I have nothing to do; and, so far as it may be possible, I shall avoid the expression of any opinion as to the objective truth or falsehood of the systems of theological speculation of which I may find occasion to speak. From my present point of view, theology is regarded as a natural product of the operations of the human mind, under the conditions of its existence, just as any other branch of science, or the arts of architecture, or music, or painting are such products. Like them, theology has a history. Like them also, it is to be met with in certain simple and rudimentary forms; and these can be connected by a multitude of gradations, which exist or have existed, among people of various ages and races, with the most highly developed theologies of past and present times. It is not my object to interfere, even in the slightest degree, with beliefs which anybody holds sacred; or to alter the conviction of any one who is of opinion that, in dealing with theology, we ought to be guided by considerations different from those which would be thought appropriate if the problem lay in the province of chemistry or of mineralogy. And if people of these ways of thinking choose to read beyond the present paragraph, the responsibility for meeting with anything they may dislike rests with them and not with me.

We are all likely to be more familiar with the theological history of the Israelites than with that of any other nation. We may therefore fitly make it the first object of our studies; and it will be convenient to commence with that period which lies between the invasion of Canaan and the early days of the monarchy, and answers to the eleventh and twelfth centuries B.C. or thereabouts. The evidence on which any conclusion as to the nature of Israelitic theology in those days must be based is wholly contained in the Hebrew Scriptures—an agglomeration of documents which certainly belong to very different ages, but of the exact dates and authorship of any one of which (except perhaps a few of the prophetical writings) there is no evidence, either internal or external, so far as I can discover, of such a nature as to justify more than a confession of ignorance, or, at most, an approximate conclusion. In this venerable record of ancient life, miscalled a book, when it is really a library comparable to a selection of works from English literature between the times of Beda and those of Milton, we have the stratified deposits (often confused and even with their natural order inverted) left by the stream of the intellectual and moral life of Israel during many centuries. And, embedded in these strata, there are numerous remains of forms of thought which once lived, and which, though often unfortunately mere fragments, are of priceless value to the anthropologist....