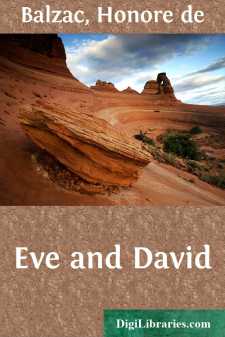 Lucien had gone to Paris; and David Sechard, with the courage and intelligence of the ox which painters give the Evangelist for accompanying symbol, set himself to make the large fortune for which he had wished that evening down by the Charente, when he sat with Eve by the weir, and she gave him her hand and her heart. He wanted to make the money quickly, and less for himself than for Eve's sake and Lucien's. He would place his wife amid the elegant and comfortable surroundings that were hers by right, and his strong arm should sustain her brother's ambitions—this was the programme that he saw before his eyes in letters of fire.

Journalism and politics, the immense development of the book trade, of literature and of the sciences; the increase of public interest in matters touching the various industries in the country; in fact, the whole social tendency of the epoch following the establishment of the Restoration produced an enormous increase in the demand for paper. The supply required was almost ten times as large as the quantity in which the celebrated Ouvrard speculated at the outset of the Revolution. Then Ouvrard could buy up first the entire stock of paper and then the manufacturers; but in the year 1821 there were so many paper-mills in France, that no one could hope to repeat his success; and David had neither audacity enough nor capital enough for such speculation. Machinery for producing paper in any length was just coming into use in England. It was one of the most urgent needs of the time, therefore, that the paper trade should keep pace with the requirements of the French system of civil government, a system by which the right of discussion was to be extended to every man, and the whole fabric based upon continual expression of individual opinion; a grave misfortune, for the nation that deliberates is but little wont to act.

So, strange coincidence! while Lucien was drawn into the great machinery of journalism, where he was like to leave his honor and his intelligence torn to shreds, David Sechard, at the back of his printing-house, foresaw all the practical consequences of the increased activity of the periodical press. He saw the direction in which the spirit of the age was tending, and sought to find means to the required end. He saw also that there was a fortune awaiting the discoverer of cheap paper, and the event has justified his clearsightedness. Within the last fifteen years, the Patent Office has received more than a hundred applications from persons claiming to have discovered cheap substances to be employed in the manufacture of paper. David felt more than ever convinced that this would be no brilliant triumph, it is true, but a useful and immensely profitable discovery; and after his brother-in-law went to Paris, he became more and more absorbed in the problem which he had set himself to solve.

The expenses of his marriage and of Lucien's journey to Paris had exhausted all his resources; he confronted the extreme of poverty at the very outset of married life....