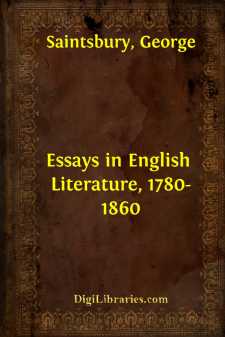 It is probably unnecessary, and might possibly be impertinent, to renew here at any length the old debate between reviewers as reviewers, and reviewers as authors—the debate whether the reissue of work contributed to periodicals is desirable or not. The plea that half the best prose literature of this century would be inaccessible if the practice had been forbidden, and the retort that anything which can pretend to keep company with the best literature of the century will be readily relieved from the objection, at once sum up the whole quarrel, and leave it undecided. For my own part, I think that there is a sufficient connection of subject in the following chapters, and I hope that there is a sufficient uniformity of treatment. The former point, as the least important, may be dismissed first. All the literature here discussed is—with the exception of Crabbe's earliest poems, and the late aftermath of Peacock and Borrow—work of one and the same period, the first half of the present century. The authors criticised were all contemporaries; with only one exception, if with one, they were all writing more or less busily within a single decade, that of 1820 to 1830. And they have the further connection (which has at least the reality of having been present to my mind in selecting them), that while every one of them was a man of great literary power, hardly one has been by general consent, or except by private crotchet would be, put among the very greatest. They stand not far below, but distinctly below, Scott, Byron, Wordsworth, Shelley, Coleridge, and Keats. Yet again, they agree in the fact that hardly one of them has yet been securely set in the literary niche which is his due, all having been at some time either unduly valued or unduly neglected, and one or two never having yet received even due appreciation. The greatest of all critics was accused, unjustly, of having a certain dislike of clear, undoubted supremacy. It would be far more fair to say that Sainte-Beuve had eminently, what perhaps all critics who are not mere carpers on the one hand, or mere splashers of superlatives on the other, have more or less—an affection for subjects possessing but qualified merit, and so giving to criticism a certain additional interest in the task of placing and appraising them.

This last sentence may not meet with universal assent, but it will bring me conveniently to the second part of my subject. I should not have republished these essays if I had not thought that, whatever may be their faults (and a man who does not see the faults of his own writing on revising it a second time for the press after an interval, must be either a great genius or an intolerable fool), they possess a certain unity of critical method. Nor should I have republished them if it had seemed to me that this method was exactly identical with that of any other critic of the present day in England. I have at least endeavoured to wear my rue with a difference, and that not merely for the sake of differing.

Mr. Goldwin Smith, whose work is not likely to be impeached for defect either in form or in substance, wrote but a few months ago, in melancholy mood, that the province of criticism appeared to be now limited to the saying of fine things. I agree with him that this is one vicious extreme of the popular conception of the art; but in order to define correctly, we cannot be contented with one only. The other, as it seems to me, is fixed by the notion, now warmly championed by some younger critics both at home and abroad, that criticism must be of all things "scientific." For my own part, I have gravely and strenuously endeavoured to ascertain from the writings both of foreign critics (the chief of whom was the late M. Hennequin in France), and of their disciples at home, what "scientific" criticism means. In no case have I been able to obtain any clear conception of its connotation in the mouths or minds of those who use the phrase....