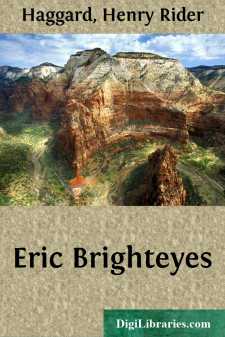 You have graciously conveyed to me the intelligence that during the weary weeks spent far from his home—in alternate hope and fear, in suffering and mortal trial—a Prince whose memory all men must reverence, the Emperor Frederick, found pleasure in the reading of my stories: that "they interested and fascinated him."

While the world was watching daily at the bedside of your Majesty's Imperial husband, while many were endeavouring to learn courage in our supremest need from the spectacle of that heroic patience, a distant writer little knew that it had been his fortune to bring to such a sufferer an hour's forgetfulness of sorrow and pain.

This knowledge, to an author, is far dearer than any praise, and it is in gratitude that, with your Majesty's permission, I venture to dedicate to you the tale of Eric Brighteyes.

The late Emperor, at heart a lover of peace, though by duty a soldier of soldiers, might perhaps have cared to interest himself in a warrior of long ago, a hero of our Northern stock, whose days were spent in strife, and whose latest desire was Rest. But it may not be; like the Golden Eric of this Saga, and after a nobler fashion, he has passed through the Hundred Gates into the Valhalla of Renown.

To you, then, Madam, I dedicate this book, a token, however slight and unworthy, of profound respect and sympathy.

Your Majesty's most obedient servant,

"Eric Brighteyes" is a romance founded on the Icelandic Sagas. "What is a saga?" "Is it a fable or a true story?" The answer is not altogether simple. For such sagas as those of Burnt Njal and Grettir the Strong partake both of truth and fiction: historians dispute as to the proportions. This was the manner of the saga's growth: In the early days of the Iceland community—that republic of aristocrats—say, between the dates 900 and 1100 of our era, a quarrel would arise between two great families. As in the case of the Njal Saga, its cause, probably, was the ill doings of some noble woman. This quarrel would lead to manslaughter. Then blood called for blood, and a vendetta was set on foot that ended only with the death by violence of a majority of the actors in the drama and of large numbers of their adherents. In the course of the feud, men of heroic strength and mould would come to the front and perform deeds worthy of the iron age which bore them. Women also would help to fashion the tale, for good or ill, according to their natural gifts and characters. At last the tragedy was covered up by death and time, leaving only a few dinted shields and haunted cairns to tell of those who had played its leading parts.

But its fame lived on in the minds of men. From generation to generation skalds wandered through the winter snows, much as Homer may have wandered in his day across the Grecian vales and mountains, to find a welcome at every stead, because of the old-time story they had to tell....