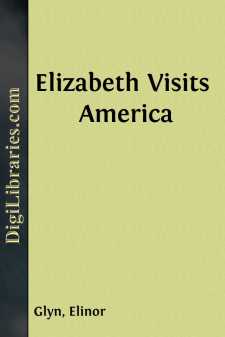 Dearest Mamma,—I hope you are taking every possible care of Hurstbridge and Ermyntrude and seeing that the sweet angels do not eat pounds of chocolate between meals. If I had known how Harry was going to behave to me over such a simple thing as the Vicomte's letter, I could never have let you take the children with you to Arcachon for these next months—I am feeling so lonely.

I came to great aunt Maria's because on Saturday night when Harry refused to say he was sorry, it seemed the only dignified thing to do. I never thought of course that he would rush off to Africa like this, and although I feel I was perfectly right and should act in the very same way again—still—well, there is no use talking about it, dearest Mamma—and please don't write me a sermon on wifely duty and submission—because it will only make me worse.

I don't know what I shall do next or where I shall go—I mean to take the first chance of having some fun I can get. If he could go off in a huff—but I won't speak of him even—I am going to forget I am married and have a good time like everyone else does. Naturally, I haven't told a soul but you about it all—our quarrel I mean—and Aunt Maria thinks I am a poor ill-used darling to have a husband who wants to shoot lions, but Uncle John said it is quite natural, and Aunt Maria heard that and said, "Tut tut," at once.

There is a tremendous excitement here! Can you imagine it, Mamma? They have actually got an automobile! It came this morning, and if it had been a flying machine it could not have been considered more wonderful. It is Uncle John's fiftieth wedding present to Aunt Maria!—and they are going in it on the same tour they took on their wedding journey! Aunt Maria, as you know, has never been abroad since. We all went into the stable yard to see it. The face of the coachman! (You remember him?—always the same one.) It was a mixture of contempt and defiance. They did suggest having him taught a chauffeur's duties, but the man who came from the place they bought the car wisely suggested it might, at his age, be dangerous, and Aunt Maria also feared it would be bad for his sore throat—it is still sore!—so they have abandoned this idea.

They start on Monday—the anniversary of their wedding—and they have asked me to go with them, and I really think I shall.

The most marvellous preparations are being made. One would think it was a journey to the South Pole. Aunt Maria spends hours each day in writing and rewriting lists of things she must have with her, and then Uncle John protests that only the smallest amount of luggage can be taken. So she consults with Janet Mackintosh, her maid, and then she turns to me and in a loud whisper says that of course she has to be patient with poor Janet as she is a newcomer and does not yet know her ways! She has been with her five years now, ever since her last Methuselah died, so one would have thought that long enough to learn, wouldn't one, Mamma...?