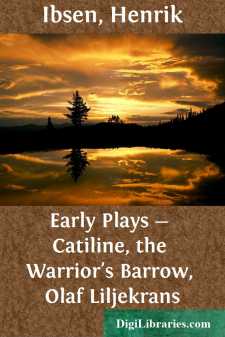 One of the most remarkable facts about Ibsen is the orderly development of his genius. He himself repeatedly maintained that his dramas were not mere isolated accidents. In the foreword to the readers in the popular edition of 1898 he urges the public to read his dramas in the same order in which he had written them, deplores the fact that his earlier works are less known and less understood than his later works, and insists that his writings taken as a whole constitute an organic unity. The three of his plays offered here for the first time in English translation will afford those not familiar with the original Norwegian some light on the early stages of his development.

Catiline, the earliest of Ibsen's plays, was written in 1849, while Ibsen was an apothecary's apprentice in Grimstad. It appeared in Christiania in the following spring under the pseudonym Brynjolf Bjarme. The revolutionary atmosphere of 1848-49, the reading of the story of Catiline in Sallust and Cicero in preparation for the university examinations, the hostility which existed between the apprentice and his immediate social environment, the fate which the play met at the hands of the theatrical management and the publishers, his own struggles at the time,—are all set forth clearly enough in the preface to the second edition. The play was written in the blank verse of Oehlenschlaeger's romantic dramas. Ibsen's portrayal of the Roman politician is not in accord with tradition; Catiline is not an out-and-out reprobate, but an unfortunate and highly sensitive individual in whom idealism and licentiousness struggle for mastery. Vasenius, in his study of the poet (Ibsens Dramatiska Diktning in dess Första Skede, Helsingfors, 1879), insists that Ibsen thus intuitively hit upon the real Catiline revealed by later nineteenth century research. The poet seems not to have heard of Duma's Catiline, which appeared about the same time, nor of earlier plays on the subject by Ben Jonson and others. The struggle in Ibsen's play is centered in the soul of Catiline; not once do his political opponents appear on the scene. Only one critic raised his voice in behalf of the play at the time of its appearance, and only a few copies of the original edition survive. Ibsen issued in 1875 a revised edition in celebration of his twenty-fifth anniversary as an author. Since then a third edition has been issued in 1891, and a fourth in 1913.

The Warrior's Barrow, Ibsen's second play, was finished in 1850 shortly after the publication of Catiline. Ibsen entered upon his literary career with a gusto he seems soon to have lost; he wrote to his friend Ole Schulerud in January, 1850, that he was working on a play about Olaf Trygvesson, an historical novel, and a longer poem. He had begun The Warrior's Barrow while he was still at Grimstad, but this early version, called The Normans, he revised on reaching Christiania. In style and manner and even in subject-matter the play echoes Oehlenschlaeger. Ibsen's vikings are, however, of a fiercer type than Oehlenschlaeger's, and this treatment of viking character was one of the things the critics, bred to Oehlenschlaeger's romantic conception of more civilized vikings, found fault with in Ibsen's play....