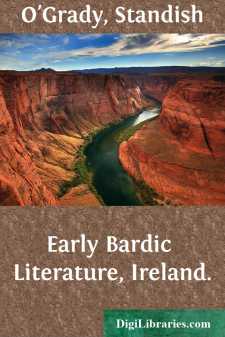 Scattered over the surface of every country in Europe may be found sepulchral monuments, the remains of pre-historic times and nations, and of a phase of life will civilisation which has long since passed away. No country in Europe is without its cromlechs and dolmens, huge earthen tumuli, great flagged sepulchres, and enclosures of tall pillar-stones. The men by whom these works were made, so interesting in themselves, and so different from anything of the kind erected since, were not strangers and aliens, but our own ancestors, and out of their rude civilisation our own has slowly grown. Of that elder phase of European civilisation no record or tradition has been anywhere bequeathed to us. Of its nature, and the ideas and sentiments whereby it was sustained, nought may now be learned save by an examination of those tombs themselves, and of the dumb remnants, from time to time exhumed out of their soil—rude instruments of clay, flint, brass, and gold, and by speculations and reasonings founded upon these archaeological gleanings, meagre and sapless.

For after the explorer has broken up, certainly desecrated, and perhaps destroyed, those noble sepulchral raths; after he has disinterred the bones laid there once by pious hands, and the urn with its unrecognisable ashes of king or warrior, and by the industrious labour of years hoarded his fruitless treasure of stone celt and arrow-head, of brazen sword and gold fibula and torque; and after the savant has rammed many skulls with sawdust, measuring their capacity, and has adorned them with some obscure label, and has tabulated and arranged the implements and decorations of flint and metal in the glazed cases of the cold gaunt museum, the imagination, unsatisfied and revolted, shrinks back from all that he has done. Still we continue to inquire, receiving from him no adequate response, Who were those ancient chieftains and warriors for whom an affectionate people raised those strange tombs? What life did they lead? What deeds perform? How did their personality affect the minds of their people and posterity? How did our ancestors look upon those great tombs, certainly not reared to be forgotten, and how did they—those huge monumental pebbles and swelling raths—enter into and affect the civilisation or religion of the times?

We see the cromlech with its massive slab and immense supporting pillars, but we vainly endeavour to imagine for whom it was first erected, and how that greater than cyclopean house affected the minds of those who made it, or those who were reared in its neighbourhood or within reach of its influence. We see the stone cist with its great smooth flags, the rocky cairn, and huge barrow and massive walled cathair, but the interest which they invariably excite is only aroused to subside again unsatisfied. From this department of European antiquities the historian retires baffled, and the dry savant is alone master of the field, but a field which, as cultivated by him alone, remains barren or fertile only in things the reverse of exhilarating. An antiquarian museum is more melancholy than a tomb.

But there is one country in Europe in which, by virtue of a marvellous strength and tenacity of the historical intellect, and of filial devotedness to the memory of their ancestors, there have been preserved down into the early phases of mediaeval civilisation, and then committed to the sure guardianship of manuscript, the hymns, ballads, stories, and chronicles, the names, pedigrees, achievements, and even characters, of those ancient kings and warriors over whom those massive cromlechs were erected and great cairns piled. There is not a conspicuous sepulchral monument in Ireland, the traditional history of which is not recorded in our ancient literature, and of the heroes in whose honour they were raised. In the rest of Europe there is not a single barrow, dolmen, or cist of which the ancient traditional history is recorded; in Ireland there is hardly one of which it is not. And these histories are in many cases as rich and circumstantial as that of men of the greatest eminence who have lived in modern times....