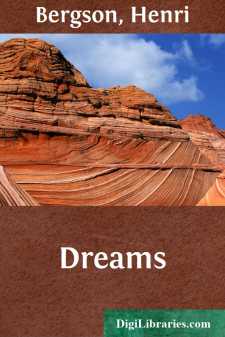 Add to My Favorites
Published: 9 years ago
Downloads: 188
Rating: (0 Votes)

Before the dawn of history mankind was engaged in the study of dreaming. The wise man among the ancients was preëminently the interpreter of dreams. The ability to interpret successfully or plausibly was the quickest road to royal favor, as Joseph and Daniel found it to be; failure to give satisfaction in this respect led to banishment from court or death. When a scholar laboriously translates a cuneiform tablet dug up from a Babylonian mound where it has lain buried for five thousand years or more, the chances are that it will turn out either an astrological treatise or a dream book. If the former, we look upon it with some indulgence; if the latter with pure contempt. For we know that the study of the stars, though undertaken for selfish reasons and pursued in the spirit of charlatanry, led at length to physical science, while the study of dreams has proved as unprofitable as the dreaming of them. Out of astrology grew astronomy. Out of oneiromancy has grown—nothing.

That at least was substantially true up to the beginning of the present century. Dream books in all languages continued to sell in cheap editions and the interpreters of dreams made a decent or, at any rate, a comfortable living out of the poorer classes. But the psychologist rarely paid attention to dreams except incidentally in his study of imagery, association and the speed of thought. But now a change has come over the spirit of the times. The subject of the significance of dreams, so long ignored, has suddenly become a matter of energetic study and of fiery controversy the world over.

The cause of this revival of interest is the new point of view brought forward by Professor Bergson in the paper which is here made accessible to the English-reading public. This is the idea that we can explore the unconscious substratum of our mentality, the storehouse of our memories, by means of dreams, for these memories are by no means inert, but have, as it were, a life and purpose of their own, and strive to rise into consciousness whenever they get a chance, even into the semi-consciousness of a dream. To use Professor Bergson's striking metaphor, our memories are packed away under pressure like steam in a boiler and the dream is their escape valve.

That this is more than a mere metaphor has been proved by Professor Freud and others of the Vienna school, who cure cases of hysteria by inducing the patient to give expression to the secret anxieties and emotions which, unknown to him, have been preying upon his mind. The clue to these disturbing thoughts is generally obtained in dreams or similar states of relaxed consciousness. According to the Freudians a dream always means something, but never what it appears to mean. It is symbolic and expresses desires or fears which we refuse ordinarily to admit to consciousness, either because they are painful or because they are repugnant to our moral nature. A watchman is stationed at the gate of consciousness to keep them back, but sometimes these unwelcome intruders slip past him in disguise. In the hands of fanatical Freudians this theory has developed the wildest extravagancies, and the voluminous literature of psycho-analysis contains much that seems to the layman quite as absurd as the stuff which fills the twenty-five cent dream book.

It is impossible to believe that the subconsciousness of every one of us contains nothing but the foul and monstrous specimens which they dredge up from the mental depths of their neuropathic patients and exhibit with such pride.

Bergson's view seems to me truer as it is certainly more agreeable, that we keep stored away somewhere all our memories, the good as well as the evil, the pleasant together with the unpleasant. There may be nightmares down cellar, as we thought as a child, but even in those days we knew how to dodge them when we went after apples; that is, take down a light and slam the door quickly on coming up.

Maeterlinck, too, knew this trick of our childhood. When in the Palace of Night scene of his fairy play, the redoubtable Tyltyl unlocks the cage where are confined the nightmares and all other evil imaginings, he shuts the door in time to keep them in and then opens another revealing a lovely garden full of blue birds, which, though they fade and die when brought into the light of common day, yet encourage him to continue his search for the Blue Bird that never fades, but lives everlastingly....