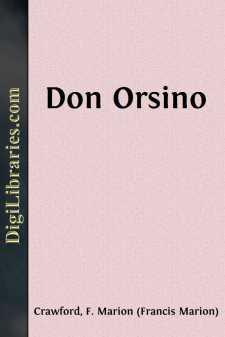 Don Orsino Saracinesca is of the younger age and lives in the younger Rome, with his father and mother, under the roof of the vast old palace which has sheltered so many hundreds of Saracinesca in peace and war, but which has rarely in the course of the centuries been the home of three generations at once during one and twenty years.

The lover of romance may lie in the sun, caring not for the time of day and content to watch the butterflies that cross his blue sky on the way from one flower to another. But the historian is an entomologist who must be stirring. He must catch the moths, which are his facts, in the net which is his memory, and he must fasten them upon his paper with sharp pins, which are dates.

By far the greater number of old Prince Saracinesca's contemporaries are dead, and more or less justly forgotten. Old Valdarno died long ago in his bed, surrounded by sons and daughters. The famous dandy of other days, the Duke of Astrardente, died at his young wife's feet some three and twenty years before this chapter of family history opens. Then the primeval Prince Montevarchi came to a violent end at the hands of his librarian, leaving his English princess consolable but unconsoled, leaving also his daughter Flavia married to that other Giovanni Saracinesca who still bears the name of Marchese di San Giacinto; while the younger girl, the fair, brown-eyed Faustina, loved a poor Frenchman, half soldier and all artist. The weak, good-natured Ascanio Bellegra reigns in his father's stead, the timidly extravagant master of all that wealth which the miser's lean and crooked fingers had consigned to a safe keeping. Frangipani too, whose son was to have married Faustina, is gone these many years, and others of the older and graver sort have learned the great secret from the lips of death.

But there have been other and greater deaths, beside which the mortality of a whole society of noblemen sinks into insignificance. An empire is dead and another has arisen in the din of a vast war, begotten in bloodshed, brought forth in strife, baptized with fire. The France we knew is gone, and the French Republic writes "Liberty, Fraternity, Equality" in great red letters above the gate of its habitation, which within is yet hung with mourning. Out of the nest of kings and princes and princelings, and of all manner of rulers great and small, rises the solitary eagle of the new German Empire and hangs on black wings between sky and earth, not striking again, but always ready, a vision of armed peace, a terror, a problem—perhaps a warning.

Old Rome is dead, too, never to be old Rome again. The last breath has been breathed, the aged eyes are closed for ever, corruption has done its work, and the grand skeleton lies bleaching upon seven hills, half covered with the piecemeal stucco of a modern architectural body. The result is satisfactory to those who have brought it about, if not to the rest of the world. The sepulchre of old Rome is the new capital of united Italy....