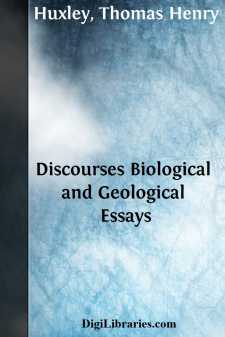 I ON A PIECE OF CHALK

If a well were sunk at our feet in the midst of the city of Norwich, the diggers would very soon find themselves at work in that white substance almost too soft to be called rock, with which we are all familiar as "chalk."

Not only here, but over the whole county of Norfolk, the well-sinker might carry his shaft down many hundred feet without coming to the end of the chalk; and, on the sea-coast, where the waves have pared away the face of the land which breasts them, the scarped faces of the high cliffs are often wholly formed of the same material. Northward, the chalk may be followed as far as Yorkshire; on the south coast it appears abruptly in the picturesque western bays of Dorset, and breaks into the Needles of the Isle of Wight; while on the shores of Kent it supplies that long line of white cliffs to which England owes her name of Albion.

Were the thin soil which covers it all washed away, a curved band of white chalk, here broader, and there narrower, might be followed diagonally across England from Lulworth in Dorset, to Flamborough Head in YorkshireвЂ”a distance of over 280 miles as the crow flies. From this band to the North Sea, on the east, and the Channel, on the south, the chalk is largely hidden by other deposits; but, except in the Weald of Kent and Sussex, it enters into the very foundation of all the south-eastern counties.

Attaining, as it does in some places, a thickness of more than a thousand feet, the English chalk must be admitted to be a mass of considerable magnitude. Nevertheless, it covers but an insignificant portion of the whole area occupied by the chalk formation of the globe, much of which has the same general characters as ours, and is found in detached patches, some less, and others more extensive, than the English. Chalk occurs in north-west Ireland; it stretches over a large part of France,вЂ” the chalk which underlies Paris being, in fact, a continuation of that of the London basin; it runs through Denmark and Central Europe, and extends southward to North Africa; while eastward, it appears in the Crimea and in Syria, and may be traced as far as the shores of the Sea of Aral, in Central Asia. If all the points at which true chalk occurs were circumscribed, they would lie within an irregular oval about 3,000 miles in long diameterвЂ”the area of which would be as great as that of Europe, and would many times exceed that of the largest existing inland seaвЂ”the Mediterranean.

Thus the chalk is no unimportant element in the masonry of the earth's crust, and it impresses a peculiar stamp, varying with the conditions to which it is exposed, on the scenery of the districts in which it occurs. The undulating downs and rounded coombs, covered with sweet-grassed turf, of our inland chalk country, have a peacefully domestic and mutton- suggesting prettiness, but can hardly be called either grand or beautiful. But on our southern coasts, the wall-sided cliffs, many hundred feet high, with vast needles and pinnacles standing out in the sea, sharp and solitary enough to serve as perches for the wary cormorant, confer a wonderful beauty and grandeur upon the chalk headlands....