Directions for Cookery, in its Various Branches 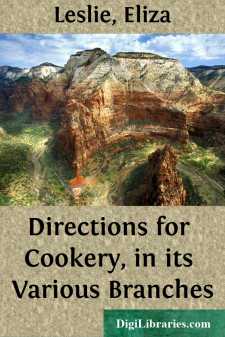 Always use soft water for making soup, and be careful to proportion the quantity of water to that of the meat. Somewhat less than a quart of water to a pound of meat, is a good rule for common soups. Rich soups, intended for company, may have a still smaller allowance of water.

Soup should always be made entirely of fresh meat that has not been previously cooked. An exception to this rule may sometimes be made in favour of the remains of a piece of roast beef that has been very much under-done in roasting. This may be added to a good piece of raw meat. Cold ham, also, may be occasionally put into white soups.

Soup made of cold meat has always a vapid, disagreeable taste, very perceptible through all the seasoning, and which nothing indeed can disguise. Also, it will be of a bad, dingy colour. The juices of the meat having been exhausted by the first cooking, the undue proportion of watery liquid renders it, for soup, indigestible and unwholesome, as well as unpalatable. As there is little or no nutriment to be derived from soup made with cold meat, it is better to refrain from using it for this purpose, and to devote the leavings of the table to some other object. No person accustomed to really good soup, made from fresh meat, can ever be deceived in the taste, even when flavoured with wine and spices. It is not true that French cooks have the art of producing excellent soups from cold scraps. There is much bad soup to be found in France, at inferior houses; but good French cooks are not, as is generally supposed, really in the practice of concocting any dishes out of the refuse of the table. And we repeat, that cold meat, even when perfectly good, and used in a large quantity, has not sufficient substance to flavour soup, or to render it wholesome.

Soup, however, that has been originally made of raw meat entirely, is frequently better the second day than the first; provided that it is re-boiled only for a very short time, and that no additional water is added to it.

Unless it has been allowed to boil too hard, so as to exhaust the water, the soup-pot will not require replenishing. When it is found absolutely necessary to do so, the additional water must be boiling hot when poured in; if lukewarm or cold, it will entirely spoil the soup.

Every particle of fat should be carefully skimmed from the surface. Greasy soup is disgusting and unwholesome. The lean of meat is much better for soup than the fat.

Long and slow boiling is necessary to extract the strength from the meat. If boiled fast over a large fire, the meat becomes hard and tough, and will not give out its juices.

Potatoes, if boiled in the soup, are thought by some to render it unwholesome, from the opinion that the water in which potatoes have been cooked is almost a poison. As potatoes are a part of every dinner, it is very easy to take a few out of the pot in which they have been boiled by themselves, and to cut them up and add them to the soup just before it goes to table....