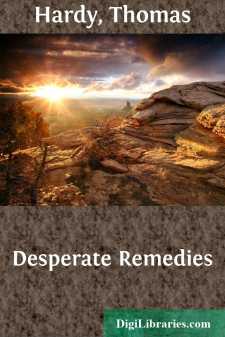 In the long and intricately inwrought chain of circumstance which renders worthy of record some experiences of Cytherea Graye, Edward Springrove, and others, the first event directly influencing the issue was a Christmas visit.

In the above-mentioned year, 1835, Ambrose Graye, a young architect who had just begun the practice of his profession in the midland town of Hocbridge, to the north of Christminster, went to London to spend the Christmas holidays with a friend who lived in Bloomsbury. They had gone up to Cambridge in the same year, and, after graduating together, Huntway, the friend, had taken orders.

Graye was handsome, frank, and gentle. He had a quality of thought which, exercised on homeliness, was humour; on nature, picturesqueness; on abstractions, poetry. Being, as a rule, broadcast, it was all three.

Of the wickedness of the world he was too forgetful. To discover evil in a new friend is to most people only an additional experience: to him it was ever a surprise.

While in London he became acquainted with a retired officer in the Navy named Bradleigh, who, with his wife and their daughter, lived in a street not far from Russell Square. Though they were in no more than comfortable circumstances, the captain's wife came of an ancient family whose genealogical tree was interlaced with some of the most illustrious and well-known in the kingdom.

The young lady, their daughter, seemed to Graye by far the most beautiful and queenly being he had ever beheld. She was about nineteen or twenty, and her name was Cytherea. In truth she was not so very unlike country girls of that type of beauty, except in one respect. She was perfect in her manner and bearing, and they were not. A mere distinguishing peculiarity, by catching the eye, is often read as the pervading characteristic, and she appeared to him no less than perfection throughout—transcending her rural rivals in very nature. Graye did a thing the blissfulness of which was only eclipsed by its hazardousness. He loved her at first sight.

His introductions had led him into contact with Cytherea and her parents two or three times on the first week of his arrival in London, and accident and a lover's contrivance brought them together as frequently the week following. The parents liked young Graye, and having few friends (for their equals in blood were their superiors in position), he was received on very generous terms. His passion for Cytherea grew not only strong, but ineffably exalted: she, without positively encouraging him, tacitly assented to his schemes for being near her. Her father and mother seemed to have lost all confidence in nobility of birth, without money to give effect to its presence, and looked upon the budding consequence of the young people's reciprocal glances with placidity, if not actual favour.

Graye's whole impassioned dream terminated in a sad and unaccountable episode. After passing through three weeks of sweet experience, he had arrived at the last stage—a kind of moral Gaza—before plunging into an emotional desert....