Democracy and Education: an introduction to the philosophy of education 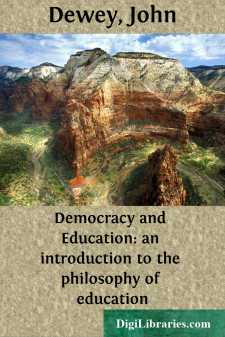 Add to My Favorites
Published: 9 years ago
Downloads: 206
Rating: (0 Votes)

Chapter One: Education as a Necessity of Life

1. Renewal of Life by Transmission. The most notable distinction between living and inanimate things is that the former maintain themselves by renewal. A stone when struck resists. If its resistance is greater than the force of the blow struck, it remains outwardly unchanged. Otherwise, it is shattered into smaller bits. Never does the stone attempt to react in such a way that it may maintain itself against the blow, much less so as to render the blow a contributing factor to its own continued action. While the living thing may easily be crushed by superior force, it none the less tries to turn the energies which act upon it into means of its own further existence. If it cannot do so, it does not just split into smaller pieces (at least in the higher forms of life), but loses its identity as a living thing.

As long as it endures, it struggles to use surrounding energies in its own behalf. It uses light, air, moisture, and the material of soil. To say that it uses them is to say that it turns them into means of its own conservation. As long as it is growing, the energy it expends in thus turning the environment to account is more than compensated for by the return it gets: it grows. Understanding the word "control" in this sense, it may be said that a living being is one that subjugates and controls for its own continued activity the energies that would otherwise use it up. Life is a self-renewing process through action upon the environment.

In all the higher forms this process cannot be kept up indefinitely. After a while they succumb; they die. The creature is not equal to the task of indefinite self-renewal. But continuity of the life process is not dependent upon the prolongation of the existence of any one individual. Reproduction of other forms of life goes on in continuous sequence. And though, as the geological record shows, not merely individuals but also species die out, the life process continues in increasingly complex forms. As some species die out, forms better adapted to utilize the obstacles against which they struggled in vain come into being. Continuity of life means continual readaptation of the environment to the needs of living organisms.

We have been speaking of life in its lowest terms—as a physical thing. But we use the word "Life" to denote the whole range of experience, individual and racial. When we see a book called the Life of Lincoln we do not expect to find within its covers a treatise on physiology. We look for an account of social antecedents; a description of early surroundings, of the conditions and occupation of the family; of the chief episodes in the development of character; of signal struggles and achievements; of the individual's hopes, tastes, joys and sufferings. In precisely similar fashion we speak of the life of a savage tribe, of the Athenian people, of the American nation. "Life" covers customs, institutions, beliefs, victories and defeats, recreations and occupations.

We employ the word "experience" in the same pregnant sense....