"De Bello Gallico" and Other Commentaries 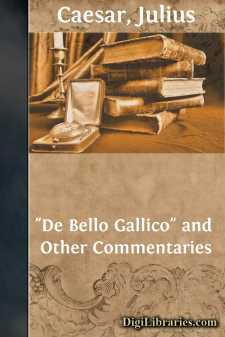 I.—All Gaul is divided into three parts, one of which the Belgae inhabit, the Aquitani another, those who in their own language are called Celts, in ours Gauls, the third. All these differ from each other in language, customs and laws. The river Garonne separates the Gauls from the Aquitani; the Marne and the Seine separate them from the Belgae. Of all these, the Belgae are the bravest, because they are farthest from the civilisation and refinement of [our] Province, and merchants least frequently resort to them and import those things which tend to effeminate the mind; and they are the nearest to the Germans, who dwell beyond the Rhine, with whom they are continually waging war; for which reason the Helvetii also surpass the rest of the Gauls in valour, as they contend with the Germans in almost daily battles, when they either repel them from their own territories, or themselves wage war on their frontiers. One part of these, which it has been said that the Gauls occupy, takes its beginning at the river Rhone: it is bounded by the river Garonne, the ocean, and the territories of the Belgae: it borders, too, on the side of the Sequani and the Helvetii, upon the river Rhine, and stretches towards the north. The Belgae rise from the extreme frontier of Gaul, extend to the lower part of the river Rhine; and look towards the north and the rising sun. Aquitania extends from the river Garonne to the Pyrenaean mountains and to that part of the ocean which is near Spain: it looks between the setting of the sun and the north star.

II.—Among the Helvetii, Orgetorix was by far the most distinguished and wealthy. He, when Marcus Messala and Marcus Piso were consuls, incited by lust of sovereignty, formed a conspiracy among the nobility, and persuaded the people to go forth from their territories with all their possessions, [saying] that it would be very easy, since they excelled all in valour, to acquire the supremacy of the whole of Gaul. To this he the more easily persuaded them, because the Helvetii are confined on every side by the nature of their situation; on one side by the Rhine, a very broad and deep river, which separates the Helvetian territory from the Germans; on a second side by the Jura, a very high mountain which is [situated] between the Sequani and the Helvetii; on a third by the Lake of Geneva, and by the river Rhone, which separates our Province from the Helvetii. From these circumstances it resulted that they could range less widely, and could less easily make war upon their neighbours; for which reason men fond of war [as they were] were affected with great regret. They thought, that considering the extent of their population, and their renown for warfare and bravery, they had but narrow limits, although they extended in length 240, and in breadth 180 [Roman] miles.

III.—Induced by these considerations, and influenced by the authority of Orgetorix, they determined to provide such things as were necessary for their expedition—to buy up as great a number as possible of beasts of burden and waggons—to make their sowings as large as possible, so that on their march plenty of corn might be in store—and to establish peace and friendship with the neighbouring states....