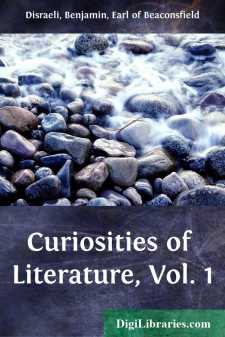 ON THE LIFE AND WRITINGS OF MR. DISRAELI. BY HIS SON.

The traditionary notion that the life of a man of letters is necessarily deficient in incident, appears to have originated in a misconception of the essential nature of human action. The life of every man is full of incidents, but the incidents are insignificant, because they do not affect his species; and in general the importance of every occurrence is to be measured by the degree with which it is recognised by mankind. An author may influence the fortunes of the world to as great an extent as a statesman or a warrior; and the deeds and performances by which this influence is created and exercised, may rank in their interest and importance with the decisions of great Congresses, or the skilful valour of a memorable field. M. de Voltaire was certainly a greater Frenchman than Cardinal Fleury, the Prime Minister of France in his time. His actions were more important; and it is certainly not too much to maintain that the exploits of Homer, Aristotle, Dante, or my Lord Bacon, were as considerable events as anything that occurred at Actium, Lepanto, or Blenheim. A Book may be as great a thing as a battle, and there are systems of philosophy that have produced as great revolutions as any that have disturbed even the social and political existence of our centuries.

The life of the author, whose character and career we are venturing to review, extended far beyond the allotted term of man: and, perhaps, no existence of equal duration ever exhibited an uniformity more sustained. The strong bent of his infancy was pursued through youth, matured in manhood, and maintained without decay to an advanced old age. In the biographic spell, no ingredient is more magical than predisposition. How pure, and native, and indigenous it was in the character of this writer, can only be properly appreciated by an acquaintance with the circumstances amid which he was born, and by being able to estimate how far they could have directed or developed his earliest inclinations.

My grandfather, who became an English Denizen in 1748, was an Italian descendant from one of those Hebrew families whom the Inquisition forced to emigrate from the Spanish Peninsula at the end of the fifteenth century, and who found a refuge in the more tolerant territories of the Venetian Republic. His ancestors had dropped their Gothic surname on their settlement in the Terra Firma, and grateful to the God of Jacob who had sustained them through unprecedented trials and guarded them through unheard-of perils, they assumed the name of DISRAELI, a name never borne before or since by any other family, in order that their race might be for ever recognised. Undisturbed and unmolested, they flourished as merchants for more than two centuries under the protection of the lion of St. Mark, which was but just, as the patron saint of the Republic was himself a child of Israel. But towards the middle of the eighteenth century, the altered circumstances of England, favourable, as it was then supposed, to commerce and religious liberty, attracted the attention of my great-grandfather to this island, and he resolved that the youngest of his two sons, Benjamin, the "son of his right hand," should settle in a country where the dynasty seemed at length established, through the recent failure of Prince Charles Edward, and where public opinion appeared definitively adverse to persecution on matters of creed and conscience.

The Jewish families who were then settled in England were few, though, from their wealth and other circumstances, they were far from unimportant. They were all of them Sephardim, that is to say, children of Israel, who had never quitted the shores of the Midland Ocean, until Torquamada had driven them from their pleasant residences and rich estates in Arragon, and Andalusia, and Portugal, to seek greater blessings, even than a clear atmosphere and a glowing sun, amid the marshes of Holland and the fogs of Britain. Most of these families, who held themselves aloof from the Hebrews of Northern Europe, then only occasionally stealing into England, as from an inferior caste, and whose synagogue was reserved only for Sephardim, are now extinct; while the branch of the great family, which, notwithstanding their own sufferings from prejudice, they had the hardihood to look down upon, have achieved an amount of wealth and consideration which the Sephardim, even with the patronage of Mr....