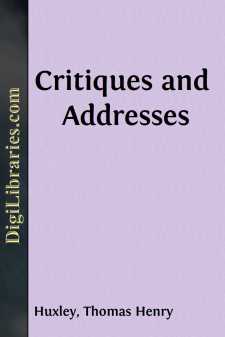 (AN ADDRESS TO THE MEMBERS OF THE MIDLAND INSTITUTE, OCTOBER 9TH, 1871.)

To me, and, as I trust, to the great majority of those whom I address, the great attempt to educate the people of England which has just been set afoot, is one of the most satisfactory and hopeful events in our modern history. But it is impossible, even if it were desirable, to shut our eyes to the fact, that there is a minority, not inconsiderable in numbers, nor deficient in supporters of weight and authority, in whose judgment all this legislation is a step in the wrong direction, false in principle, and consequently sure to produce evil in practice.

The arguments employed by these objectors are of two kinds. The first is what I will venture to term the caste argument; for, if logically carried out, it would end in the separation of the people of this country into castes, as permanent and as sharply defined, if not as numerous, as those of India. It is maintained that the whole fabric of society will be destroyed if the poor, as well as the rich, are educated; that anything like sound and good education will only make them discontented with their station and raise hopes which, in the great majority of cases, will be bitterly disappointed. It is said: There must be hewers of wood and drawers of water, scavengers and coalheavers, day labourers and domestic servants, or the work of society will come to a standstill. But, if you educate and refine everybody, nobody will be content to assume these functions, and all the world will want to be gentlemen and ladies.

One hears this argument most frequently from the representatives of the well-to-do middle class; and, coming from them, it strikes me as peculiarly inconsistent, as the one thing they admire, strive after, and advise their own children to do, is to get on in the world, and, if possible, rise out of the class in which they were born into that above them. Society needs grocers and merchants as much as it needs coalheavers; but if a merchant accumulates wealth and works his way to a baronetcy, or if the son of a greengrocer becomes a lord chancellor, or an archbishop, or, as a successful soldier, wins a peerage, all the world admires them; and looks with pride upon the social system which renders such achievements possible. Nobody suggests that there is anything wrong in their being discontented with their station; or that, in their cases society suffers by men of ability reaching the positions for which nature has fitted them.

But there are better replies than those of the tu quoque sort to the caste argument. In the first place, it is not true that education, as such, unfits men for rough and laborious, or even disgusting, occupations. The life of a sailor is rougher and harder than that of nine landsmen out of ten, and yet, as every ship's captain knows, no sailor was ever the worse for possessing a trained intelligence. The life of a medical practitioner, especially in the country, is harder and more laborious than that of most artisans, and he is constantly obliged to do things which, in point of pleasantness, cannot be ranked above scavengering—yet he always ought to be, and he frequently is, a highly educated man....