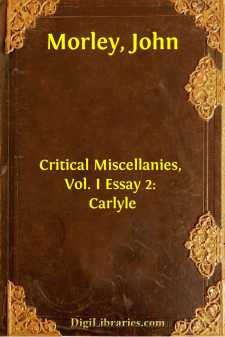 The new library edition of Mr. Carlyle's works may be taken for the final presentation of all that the author has to say to his contemporaries, and to possess the settled form in which he wishes his words to go to those of posterity who may prove to have ears for them. The canon is definitely made up. The golden Gospel of Silence is effectively compressed in thirty fine volumes. After all has been said about self-indulgent mannerisms, moral perversities, phraseological outrages, and the rest, these volumes will remain the noble monument of the industry, originality, conscientiousness, and genius of a noble character, and of an intellectual career that has exercised on many sides the profoundest sort of influence upon English feeling. Men who have long since moved far away from these spiritual latitudes, like those who still find an adequate shelter in them, can hardly help feeling as they turn the pages of the now disused pieces which they were once wont to ponder daily, that whatever later teachers may have done in definitely shaping opinion, in giving specific form to sentiment, and in subjecting impulse to rational discipline, here was the friendly fire-bearer who first conveyed the Promethean spark, here the prophet who first smote the rock.

That with this sense of obligation to the master, there mixes a less satisfactory reminiscence of youthful excess in imitative phrases, in unseasonably apostolic readiness towards exhortation and rebuke, in interest about the soul, a portion of which might more profitably have been converted into care for the head, is in most cases true. A hostile observer of bands of Carlylites at Oxford and elsewhere might have been justified in describing the imperative duty of work as the theme of many an hour of strenuous idleness, and the superiority of golden silence over silver speech as the text of endless bursts of jerky rapture, while a too constant invective against cant had its usual effect of developing cant with a difference. To the incorrigibly sentimental all this was sheer poison, which continues tenaciously in the system. Others of robuster character no sooner came into contact with the world and its fortifying exigencies, than they at once began to assimilate the wholesome part of what they had taken in, while the rest falls gradually and silently out. When criticism has done its just work on the disagreeable affectations of many of Mr. Carlyle's disciples, and on the nature of Mr. Carlyle's opinions and their worth as specific contributions, very few people will be found to deny that his influence in stimulating moral energy, in kindling enthusiasm for virtues worthy of enthusiasm, and in stirring a sense of the reality on the one hand, and the unreality on the other, of all that man can do or suffer, has not been surpassed by any teacher now living.

One of Mr. Carlyle's chief and just glories is, that for more than forty years he has clearly seen, and kept constantly and conspicuously in his own sight and that of his readers, the profoundly important crisis in the midst of which we are living....