Critical Miscellanies (Vol. 3 of 3) Essay 9: The Expansion of England 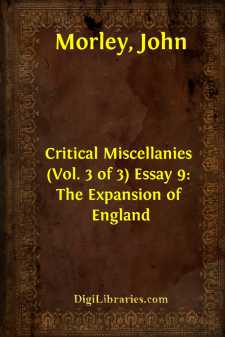 THE EXPANSION OF ENGLAND.

'There is a vulgar view of politics which sinks them into a mere struggle of interests and parties, and there is a foppish kind of history which aims only at literary display, which produces delightful books hovering between poetry and prose. These perversions, according to me, come from an unnatural divorce between two subjects which belong to one another. Politics are vulgar when they are not liberalised by history, and history fades into mere literature when it loses sight of its relation to practical politics.' These very just remarks are made by Mr. Seeley in a new book which everybody has been reading, and which is an extremely interesting example of that union of politics with history which its author regards as so useful or even indispensable for the successful prosecution of either history or politics. His lectures on the expansion of England contain a suggestive and valuable study of two great movements in our history, one of them the expansion of the English nation and state together by means of colonies; the other, the stranger expansion by which the vast population of India has passed under the rule of Englishmen. Mr. Seeley has in his new volume recovered his singularly attractive style and power of literary form. It underwent some obscuration in the three volumes in which the great transformation of Germany and Prussia during the Napoleonic age was not very happily grouped round a biography of Stein. But here the reader once more finds that ease, lucidity, persuasiveness, and mild gravity that were first shown, as they were probably first acquired, in the serious consideration of religious and ethical subjects. Mr. Seeley's aversion for the florid, rhetorical, and over-decorated fashion of writing history has not carried him to the opposite extreme, but it has made him seek sources of interest, where alone the serious student of human affairs would care to find them, in the magnitude of events, the changes of the fortunes of states, and the derivation of momentous consequences from long chains of antecedent causes.

The chances of the time have contributed to make Mr. Seeley's book, in one sense at least, singularly opportune, and have given to a philosophical study the actuality of a political pamphlet. The history of the struggle between England and France for Canada and for India acquires new point at a moment when the old rivalries are again too likely to be awakened in Madagascar, in Oceania, and in more than one region of Africa. The history of the enlargement of the English state, the last survivor of a family of great colonial empires, has a vivid reality at a time when Australasia is calling upon us once more to extend our borders, and take new races under our sway. The discussion of a colonial system ceases to be an abstract debate, and becomes a question of practical emergency, when a colonial convention presses the diplomacy of the mother-country and prompts its foreign policy. Mr. Seeley's book has thus come upon a tide of popular interest....