Critical Miscellanies (Vol. 3 of 3) Essay 8: France in the Eighteenth Century 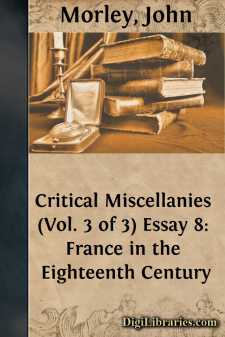 FRANCE IN THE EIGHTEENTH CENTURY.

The announcement that one of the most ingenious and accomplished men of letters in Europe was engaged upon a history of the French Revolution, raised some doubts among those who have thought most about the qualifications proper to the historian. M. Taine has the quality of the best type of a man of letters; he has the fine critical aptitude for seizing the secret of an author's or an artist's manner, for penetrating to dominant and central ideas, for marking the abstract and general under accidental forms in which they are concealed, for connecting the achievements of literature and art with facts of society and impulses of human character and life. He is the master of a style which, if it seems to lack the breadth, the firmness, the sustained and level strength of great writing, is yet always energetic, and fresh, and alive with that spontaneous reality and independence of interest which distinguishes the genuine writer from the mere weaver of sentences and the servile mechanic of the pen. The matter and form alike of M. Taine's best work—and we say best, for his work is by no means without degrees and inequalities of worth—prove that he has not shrunk from the toil and austerity of the student, from that scorn of delight and living of laborious days, by which only can men either get command of the art of just and finished expression, or gather to themselves much knowledge.

But with all its attractiveness and high uses of its own, the genius for literature in its proper sense is distinct from the genius for political history. The discipline is different, because the matter is different. To criticise Rousseau's Social Contract requires one set of attainments, and to judge the proceedings of the Constituent Assembly or the Convention requires a set of quite different attainments. A man may have the keenest sense of the filiation of ideas, of their scope and purport, and yet have a very dull or uninterested eye for the play of material forces, the wayward tides of great gatherings of men, the rude and awkward methods that sometimes go to the attainment of wise political ends.

It would perhaps not be too bold to lay down this proposition; that no good social history has ever been written by a man who has not either himself taken a more or less active part in public affairs, or else been an habitual intimate of persons who were taking such a part on a considerable scale. Everybody knows what Gibbon said about the advantage to the historian of the Roman Empire of having been a member of the English parliament and a captain in the Hampshire grenadiers. Thucydides commanded an Athenian squadron, and Tacitus filled the offices of prætor and consul. Xenophon, Polybius, and Sallust, were all men of affairs and public adventure. Guicciardini was an ambassador, a ruler, and the counsellor of rulers; and Machiavel was all these things and more....