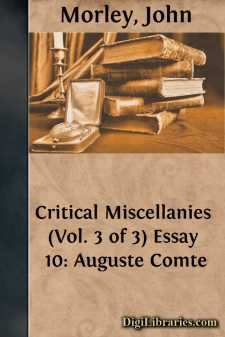 Comte is now generally admitted to have been the most eminent and important of that interesting group of thinkers whom the overthrow of old institutions in France turned towards social speculation. Vastly superior as he was to men like De Maistre on the one hand, and to men like Saint Simon or Fourier on the other, as well in scientific acquisitions as in mental capacity, still the aim and interest of all his thinking was also theirs, namely, the renovation of the conditions of the social union. If, however, we classify him, not thus according to aim, but according to method, then he takes rank among men of a very different type from these. What distinguishes him in method from his contemporaries is his discernment that the social order cannot be transformed until all the theoretic conceptions that belong to it have been rehandled in a scientific spirit, and maturely gathered up into a systematic whole along with the rest of our knowledge. This presiding doctrine connects Comte with the social thinkers of the eighteenth century,—indirectly with Montesquieu, directly with Turgot, and more closely than either with Condorcet, of whom he was accustomed to speak as his philosophic father.

Reprinted by the kind permission of Messrs. A. and C. Black from the new edition of the Encyclopædia Britannica.

Isidore-Auguste-Marie-François-Xavier Comte was born in January 1798, at Montpellier, where his father was a receiver-general of taxes for the district. He was sent for his earliest instruction to the school of the town, and in 1814 was admitted to the École Polytechnique. His youth was marked by a constant willingness to rebel against merely official authority; to genuine excellence, whether moral or intellectual, he was always ready to pay unbounded deference. That strenuous application which was one of his most remarkable gifts in manhood showed itself in his youth, and his application was backed or inspired by superior intelligence and aptness. After he had been two years at the École Polytechnique he took a foremost part in a mutinous demonstration against one of the masters; the school was broken up, and Comte like the other scholars was sent home. To the great dissatisfaction of his parents, he resolved to return to Paris (1816), and to earn his living there by giving lessons in mathematics. Benjamin Franklin was the youth's idol at this moment. 'I seek to imitate the modern Socrates,' he wrote to a school friend, 'not in talents, but in way of living. You know that at five and twenty he formed the design of becoming perfectly wise, and that he fulfilled his design. I have dared to undertake the same thing, though I am not yet twenty.' Though Comte's character and aims were as far removed as possible from Franklin's type, neither Franklin nor any man that ever lived could surpass him in the heroic tenacity with which, in the face of a thousand obstacles, he pursued his own ideal of a vocation.

For a moment circumstances led him to think of seeking a career in America, but a friend who preceded him thither warned him of the purely practical spirit that prevailed in the new country....