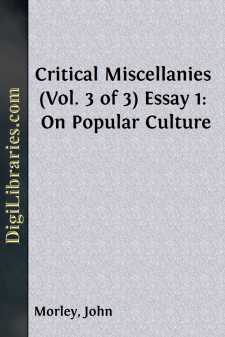 The proceedings which have now been brought satisfactorily to an end are of a kind which nobody who has sensibility as well as sense can take a part in without some emotion. An illustrious French philosopher who happened to be an examiner of candidates for admission to the Polytechnic School, once confessed that, when a youth came before him eager to do his best, competently taught, and of an apt intelligence, he needed all his self-control to press back the tears from his eyes. Well, when we think how much industry, patience, and intelligent discipline; how many hard hours of self-denying toil; how many temptations to worthless pleasures resisted; how much steadfast feeling for things that are honest and true and of good report—are all represented by the young men and young women to whom I have had the honour of giving your prizes to-night, we must all feel our hearts warmed and gladdened in generous sympathy with so much excellence, so many good hopes, and so honourable a display of those qualities which make life better worth having for ourselves, and are so likely to make the world better worth living in for those who are to come after us.

If a prize-giving is always an occasion of lively satisfaction, my own satisfaction is all the greater at this moment, because your Institute, which is doing such good work in the world, and is in every respect so prosperous and so flourishing, is the creation of the people of your own district, without subsidy and without direction either from London, or from Oxford, or from Cambridge, or from any other centre whatever. Nobody in this town at any rate needs any argument of mine to persuade him that we can only be sure of advancing all kinds of knowledge, and developing our national life in all its plenitude and variety, on condition of multiplying these local centres both of secondary and higher education, and encouraging each of them to fight its own battle, and do its work in its own way. For my own part I look with the utmost dismay at the concentration, not only of population, but of the treasures of instruction, in our vast city on the banks of the Thames. At Birmingham, as I am informed, one has not far to look for an example of this. One of the branches of your multifarious trades in this town is the manufacture of jewellery. Some of it is said commonly to be wanting in taste, elegance, skill; though some of it also—if I am not misinformed—is good enough to be passed off at Rome and at Paris, even to connoisseurs, as of Roman or French production. Now the nation possesses a most superb collection of all that is excellent and beautiful in jewellers' work. When I say that the nation possesses it, I mean that London possesses it. The University of Oxford, by the way, has also purchased a portion, but that is not at present accessible. If one of your craftsmen in that kind wants to profit by these admirable models, he must go to London. What happens is that he goes to the capital and stays there. Its superficial attractions are too strong for him. You lose a clever workman and a citizen, and he adds one more atom to that huge, overgrown, and unwieldy community. Now, why, in the name of common sense, should not a portion of the Castellani collection pass six months of the year in Birmingham, the very place of all others where it is most likely to be of real service, and to make an effective mark on the national taste?[]

To pass on to the more general remarks which you are accustomed to expect from the President of the Institute on this occasion. When I consulted one of your townsmen as to the subject which he thought would be most useful and most interesting to you, he said: 'Pray talk about anything you please, if it is only not Education.' There is a saying that there are two kinds of foolish people in the world, those who give advice, and those who do not take it. My friend and I in this matter represent these two interesting divisions of the race, for in spite of what he said, it is upon Education after all that I propose to offer you some short observations. You will believe it no affectation on my part, when I say that I shall do so with the sincerest willingness to be corrected by those of wider practical experience in teaching....