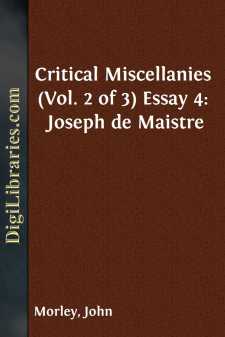 Owing to causes which lie tolerably near the surface, the remarkable Catholic reaction which took place in France at the beginning of the present century, has never received in England the attention that it deserves; not only for its striking interest as an episode in the history of European thought, but also for its peculiarly forcible and complete presentation of those ideas with which what is called the modern spirit is supposed to be engaged in deadly war. For one thing, the Protestantism of England strips a genuinely Catholic movement of speculation of that pressing and practical importance which belongs to it in countries where nearly all spiritual sentiment, that has received any impression of religion at all, unavoidably runs in Catholic forms. With us the theological reaction against the ideas of the eighteenth was not and could not be other than Protestant. The defence and reinstatement of Christianity in each case was conducted, as might have been expected, with reference to the dominant creed and system of the country. If Coleridge had been a Catholic, his works thus newly coloured by an alien creed would have been read by a small sect only, instead of exercising as they did a wide influence over the whole nation, reaching people through those usual conduits of press and pulpit, by which the products of philosophic thought are conveyed to unphilosophic minds. As naturally in France, hostility to all those influences which were believed to have brought about the Revolution, to sensationalism in metaphysics, to atheism in what should have been theology, to the notion of sovereignty of peoples in politics, inevitably sought a rallying-point in a renewed allegiance to that prodigious spiritual system which had fostered the germs of order and social feeling in Europe, and whose name remains even now in the days of its ruin, as the most permanent symbol and exemplar of stable organisation. Another reason for English indifference to this movement is the rapidity with which here, as elsewhere, dust gathers thickly round the memory of the champions of lost causes. Some of the most excellent of human characteristics—intensity of belief, for example, and a fervid anxiety to realise aspirations—unite with some of the least excellent of them, to make us too habitually forget that, as Mill has said, the best adherents of a fallen standard in philosophy, in religion, in politics, are usually next in all good qualities of understanding and sentiment to the best of those who lead the van of the force that triumphs. Men are not so anxious as they should be, considering the infinite diversity of effort that goes to the advancement of mankind, to pick up the fragments of truth and positive contribution, that so nothing be lost, and as a consequence the writings of antagonists with whom we are believed to have nothing in common, lie unexamined and disregarded.

In the case of the group of writers who, after a century of criticism, ventured once more with an intrepid confidence—differing fundamentally from the tone of preceding apologists in the Protestant camp, who were nearly as critical as the men they refuted—to vindicate not the bare outlines of Christian faith, but the entire scheme, in its extreme manifestation, of the most ancient and severely maligned of all Christian organisations, this apathy is very much to be regretted on several grounds....